So about a week or two ago I realized i had gotten lax with my Incendiary collection. They came out with a split with Xibalba that I had never bothered to preorder, which is very unlike me. I did manage to get a record release copy as a favor, but never got the other variants. By the time I went to order them, the first press was already sold out from Closed Casket Activites and a second press was up. I ordered both, on on pink which has a numbered sleeve out of 100 and the second a blue/black marble. I was also able to find a first press from Deathwish on red/black swirl. 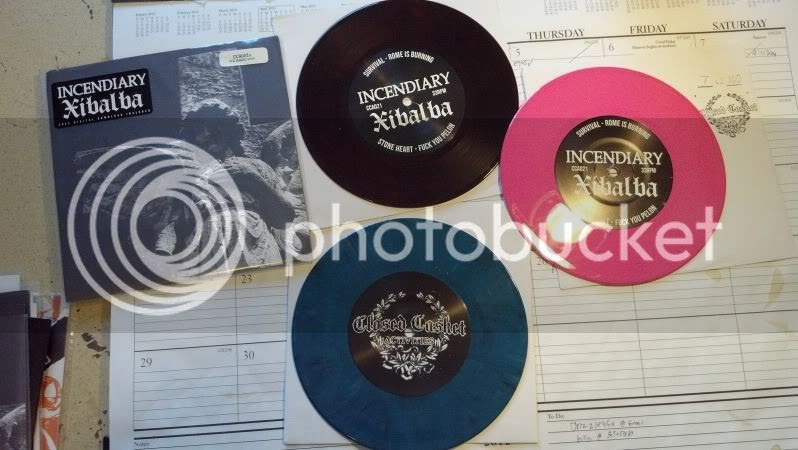 The red/black swirl up close: 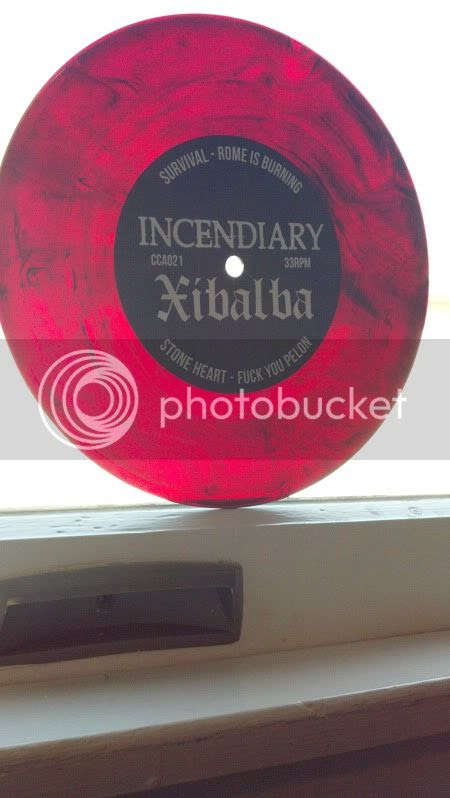 So now i just need black and clear to round out the first press!

Also, recently Justin from Unrestrained posted on B9 that they were selling some of the more limited variants of their split with Incendiary on their LP store. I was lucky to pick up a copy of Creamsickle, which is limited to 15! Now i just need pea soup(5), blood orange (6) and clear yellow(12, different cover) to finish up the first presssing. 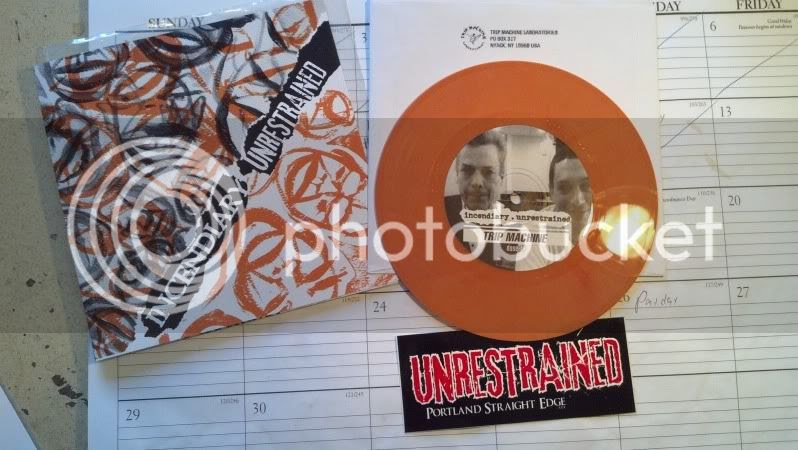 Also, recently B9 was having a deal where if you spent 10 bucks you would get a free have heart 7". I wanted the Have Heart record, so i picked up Mother of Mercy Symptoms of Exisistence on black/grey/blue swirl, Its cool since it came out almost exactly like the rest of the press when it wasnt supposed to b9 stamped the dust sleeve to note the difference. 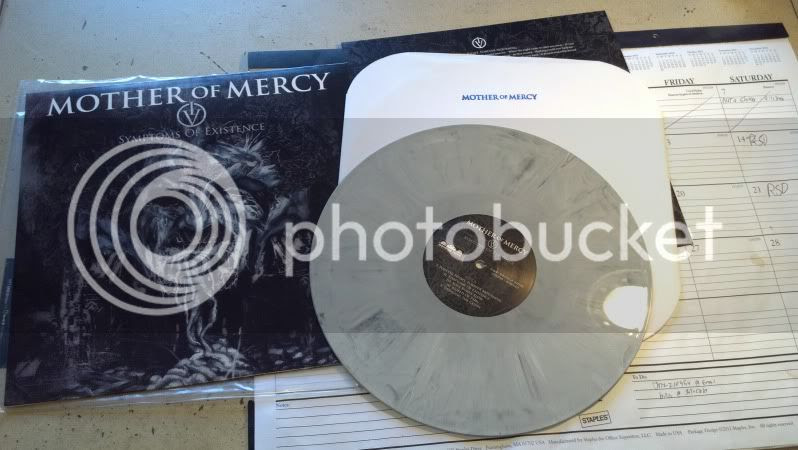 Moving on, I used to hate the band War Hungry. I dont know why but i just hated them. Usually bands i hate the first time around I end up liking a year or two later. War Hungry is no exception. I decided to pick up some stuff by them when Six Feet Under was having a sale, so I got the s/t lp and the return to earth 7" that 1917 put out. 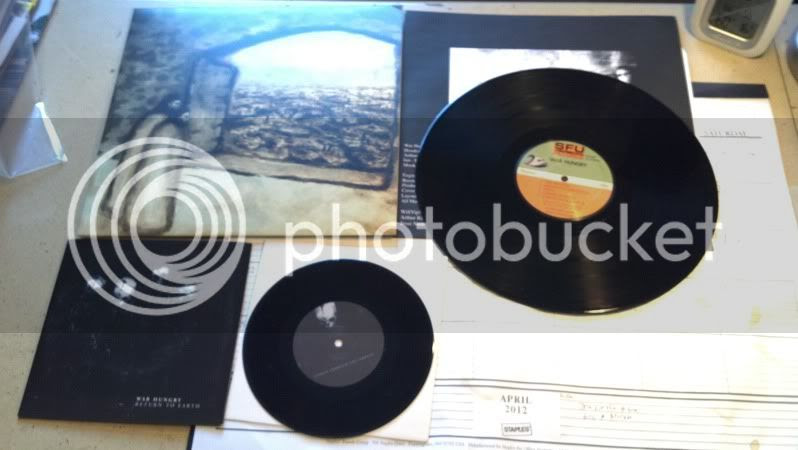 So far this has been my 2nd bad experience with ordering from SFU, and I will not be supporting his mailorder anymore.

Finally, a random ebay purchase. Culture's Deforestation 7" on Catalyst records. Culture is a 90's band that I dont know anything about. Besides the fact that I thoroughly enjoy everything I have heard from them, and will be trying to get a copy of everything they have put out. 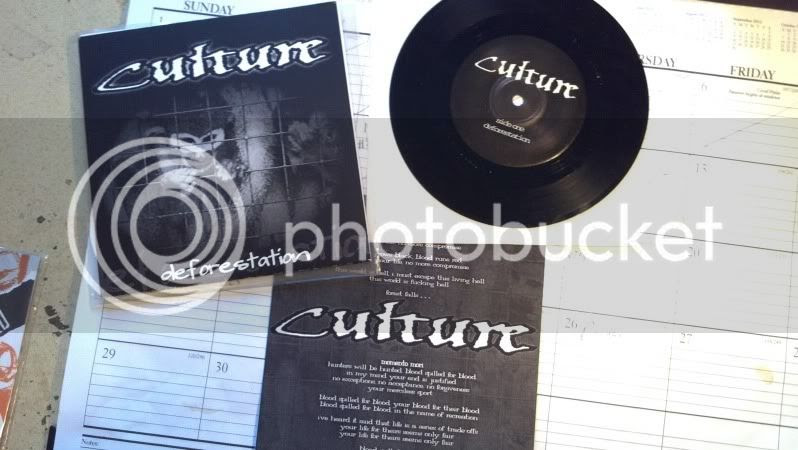 So last Sunday I went into the city to go record shopping. I don't know what it was, but I just felt like I was going to find a lot of good records. April fools on myself, I only came back with one. Speak 714's "Knee Deep in Guilt". I know nothing about Speak, besides listening to the download i had once or twice. 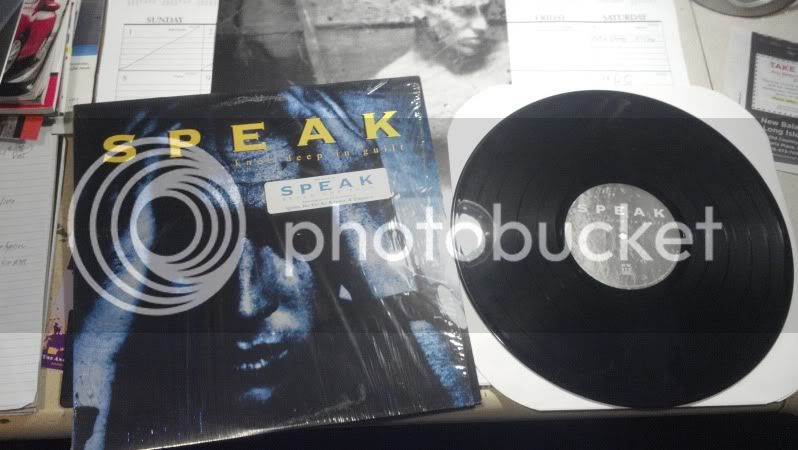 One thing i found interesting is that on the cover the name is just SPEAK and on the sticker on the original shrinkwrap it said "now known as speak seven one four". I guess at some point from when the sleeves were pressed and when the record actually came out they added the 714. I tried looking this up online but i found nothing. 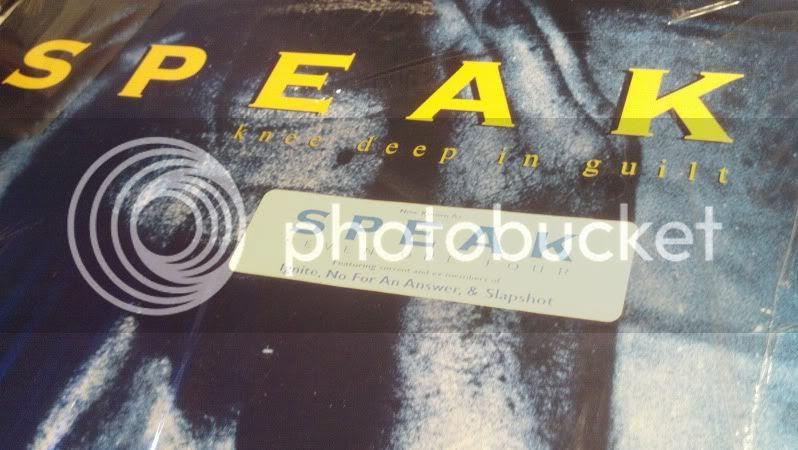 One problem I have when I go to record stores is that I always forget what records I'm looking for, or even what bands I want to look for. For whatever reason the moment I set foot in a record store the information just slips from my brain. So if I want to find what im looking for, I need to look through every single record in the punk/hc sections, or wherever i think bands i listen to may be. It gets frustrating sometimes, I need to go back to making lists of records to buy and keeping it in my wallet.
Posted by Dan at 9:36 PM No comments:

Buried Alive is easily my favorite Scott Vogel band. I enjoy all his other bands (slugfest, despair, terror), but none of them compare to Buried Alive for me. I got this 7" in the mail yesterday and must have listened to it at least 20 times last night, solidifying it as my favorite Buried Alive material. When i got The Death of Your Perfect World it didnt come off my record player for at least a week. I don't really know where I'm going with this. I guess i'll just spin this record some more. 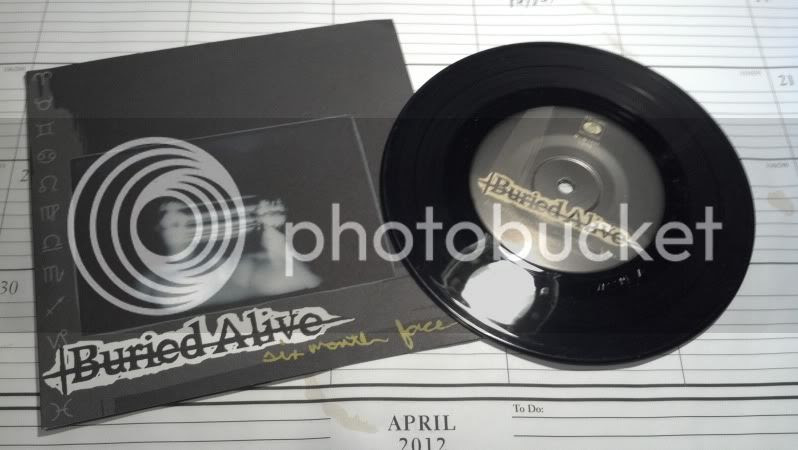