TITR WAS SO GREAT AT REV NYC

Is what i would be saying if I had gotten tickets. But I didnt, So I still have never seen Texas is the Reason.  However, going off of how they have been so active on twitter and are about to start an online merch store, i think its safe to guess they will be doing more shows soon. 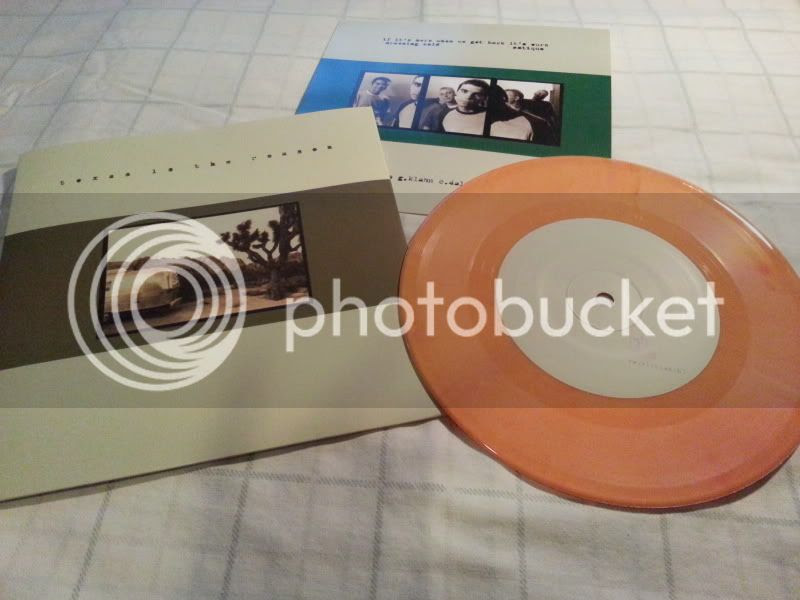 Even though I havent seen them still, I can still buy their records.  Revelation recently repressed the s/t 7" on orange vinyl. I saw the thread about it go up on Vinyl Collective and immediately got up and ordered it. Very good move. 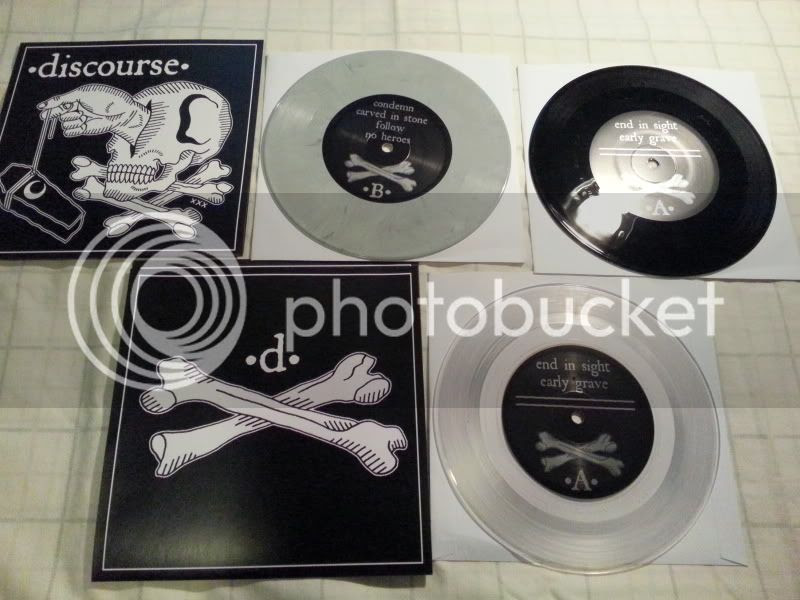 So recently Bitter Melody records and Head First records teamed up to put out the first Discourse 7".  This band is from down south somewhere, but list up north influences like Indecision, amongst other 90s hardcore bands. I really love 90's hardcore and Its great when I find a current band doing that sound right.  This record is 2 new songs and the demo, and completely worth the money. The clear on the bottom is the preorder version w/ preorder cover limited to 50, the grey is also limited to 100 and the black is limited to 300. 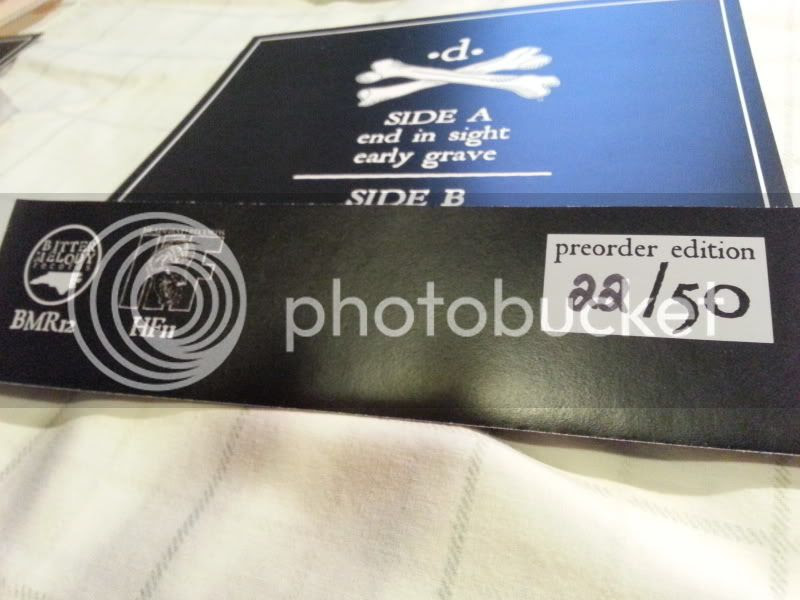 Here's the back of the preorder cover, mine is 22/50.  I was just looking at Bitter Melody's pressing info for this, and each label had 25 of the 50 covers, nothing different btwn them. But then the band also has 50 of the clear w/ regular covers. Should i get really nerdy and try to grab one of those?
Posted by Dan at 6:04 PM No comments: 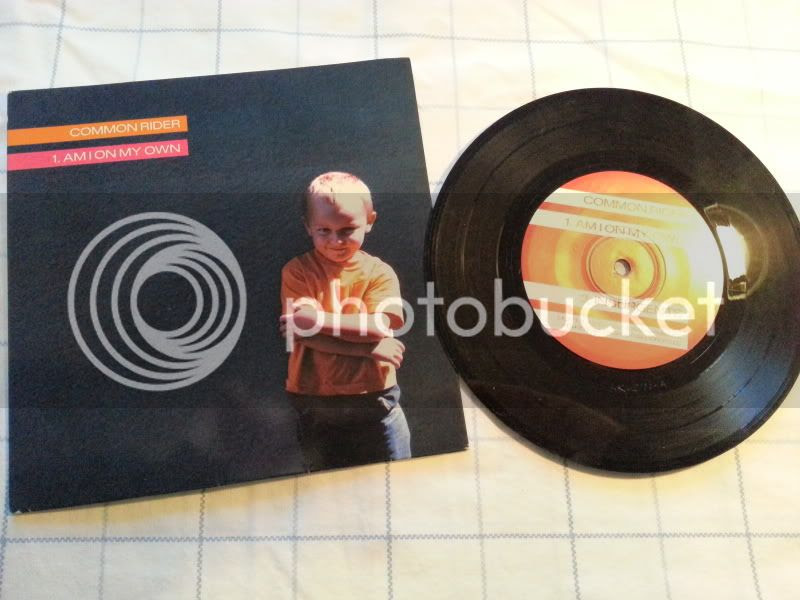 Ah Common Rider. I used to absolutely love this band. I listened to This is Unity Music constantly in highschool.  This is the Thief in a Sleeping Town ep.  I dont think i ever even had the music til now.  Pleasant surprise to find it at Academy last month.  Definitely a good listen and it really brings me back to highschool. 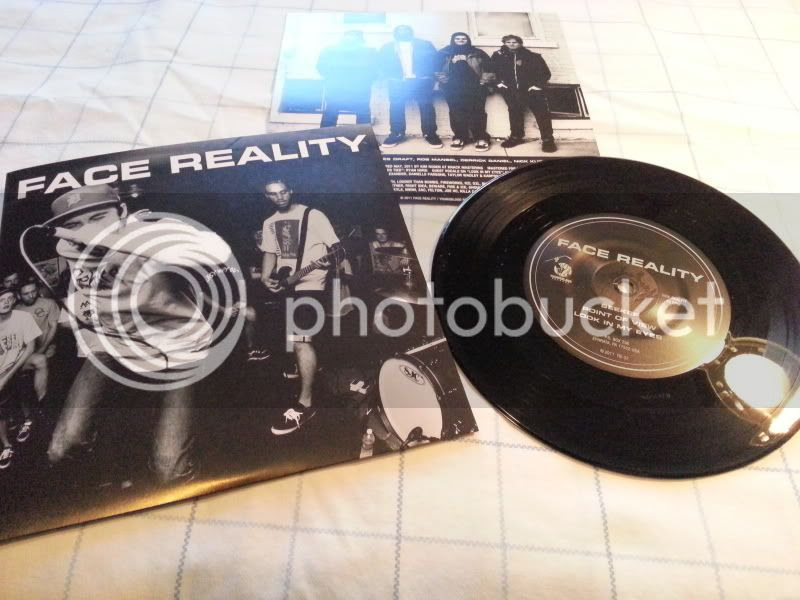 So this is the self titled Face Reality 7" on Youngblood. I've listened to it a few times and at first i was meh about it, just straightforward straightedge hardcore.  But now that i've spun it a few times I'm definitley enjoying it more,  They music is definitely progressing since their demo, and I am finding myself wanting to get up and mosh around my room.  Thats a good thing. 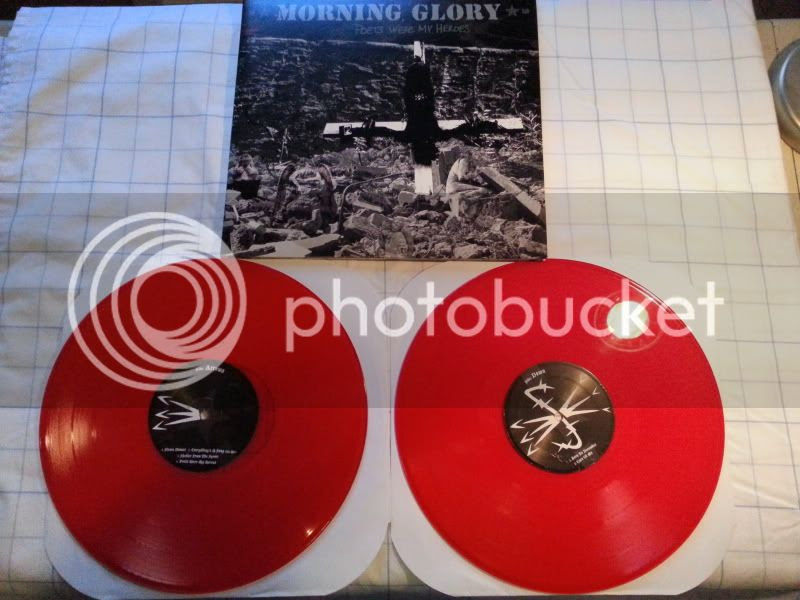 So let me be honest here, before I found hardcore, I loved bands that fell under the "ska-core" moniker.  Choking Victim, Leftover Crack, Morning Glory, loved them.  I always enjoyed MG a little more because their songs were rougher and a little harder.  When I heard they were putting out a new record after years of doing jack shit I was excited and actually pre-ordered it from Fat Wreck.  Double Lp on colored vinyl? How could I go wrong. Well I listened to the 1st of the 2 lps and I didnt make it any further.  This doesnt sound anything like old morning glory. Maybe I'll visit it again down the road, but for now when i want morning glory ill listen to This is no Time Ta Sleep. 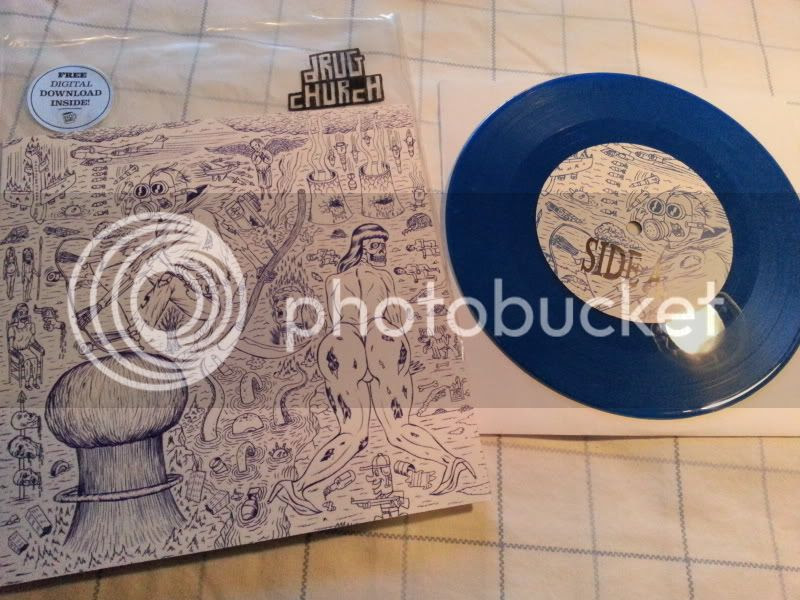 So this band is being sold as having Quicksand influences.  Usually this means an insta-buy for me.  I had listened to this bands songs on their bandcamp and really enjoyed them so I was excited to buy the record.  I was going to order it right from the label to get the more limited color, but then I opted to just buy it at Generation.  This is pen ink blue out of 500.  The band name is screen printed on the plastic cover which is a nice different touch. This record is good and definitely has that post hardcore feel that i love, albeit a litte more poppy.
Posted by Dan at 12:00 PM No comments:

The LP's are stacking up

So i'm just gonna catch up here and talk about a few different LPs i got recently: 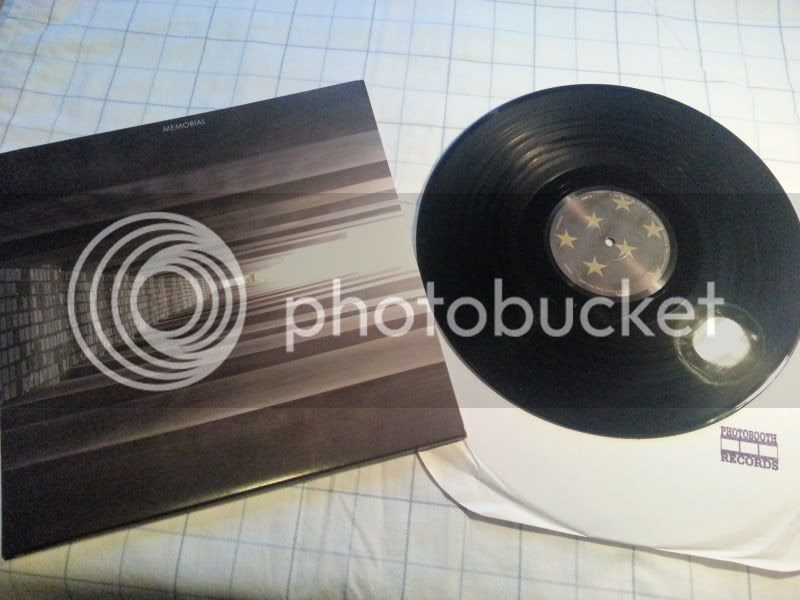 This is the Memorial "The Creative Process/Berlin" lp on black vinyl, Limited to 100. The sleeve is stamped with the photobooth records logo.  Something originally happened with this lp when it first came out.  I think it was supposed to come out on a different label and when it finaly did the preorder version didnt play at all? I really dont know but this version and the yellow i have play great and this is an amazing record. 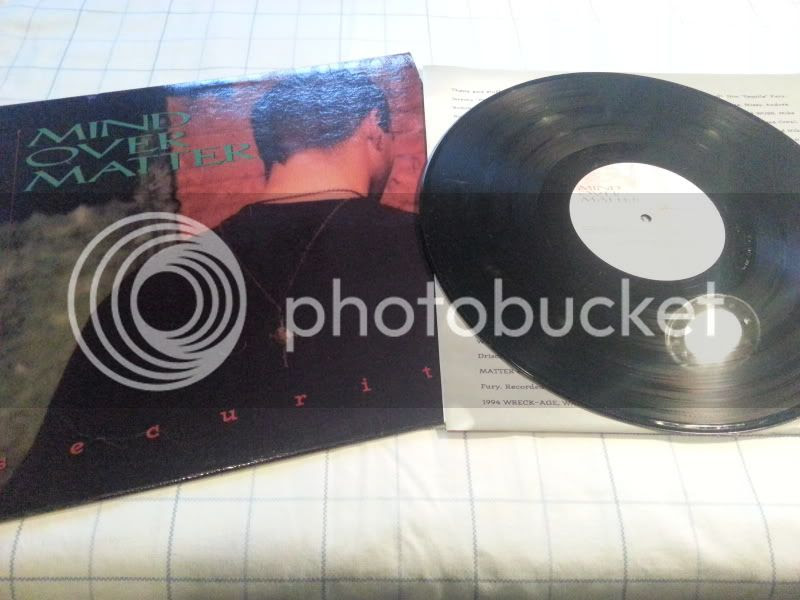 Ah Mind Over Matter! I love this band and Security is easily my favorite material by them.  The frustration and mental anguish is easily conveyed in this record.  I've been lucky and have gotten to see them multiple times since the broke up.  Most recently June 11 when they played long island fest. And they covered LSS at that show, insane. 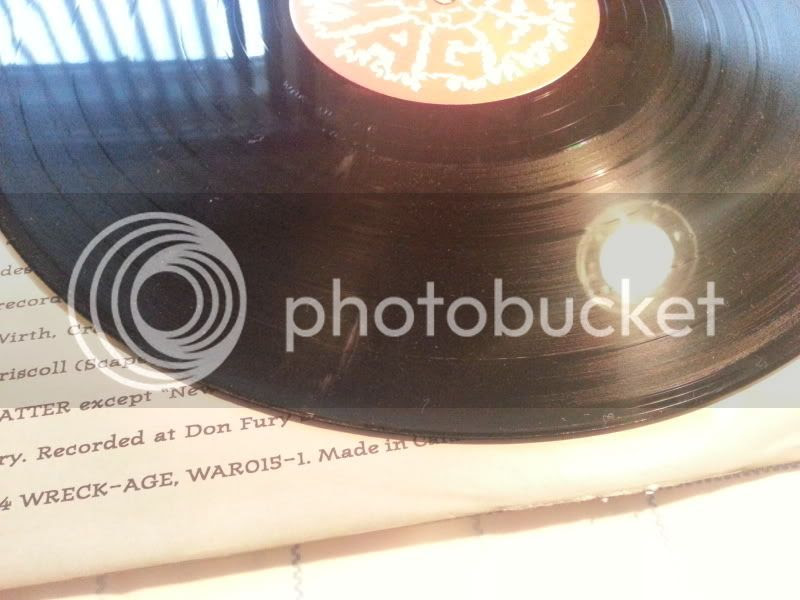 Anyway this was an ebay score where the seller listed it as black and having white streaks. He didnt post a picture of the vinyl but i took a chance.  You can see pretty clearly what he is talking about here, but I dont know if thats enough to classify it as different.  In other news, I still need this on RED, someone help! 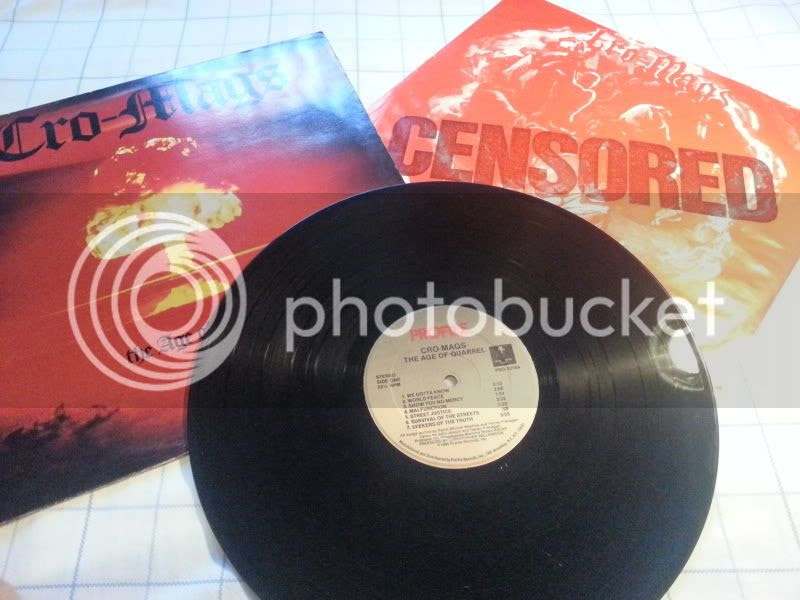 Lastly we have one of the most important, if not the most important, hardcore record ever.  The Cro Mags "Age of Quarrel". I picked this up off a guy from the B9 board. The cover is in alright condition, and there's a skip in We Gotta Know, but otherwise it is fine and well worth the 50 i spent.  I am happy to own this record finally, and next up i have to get the uncensored sleeve. I was supposed to see Cro-Mags again over the summer. But then something happened between Harley and DMS which caused the show to stop.  My friends and I were standing in the middle of the floor waiting for the mags to start, when the light came on. I got excited because i prefer lights on at shows so i can see if im about to get knocked in the face.  But nope, show ended.  John Joseph promised a make up show but it hasnt happened yet, the Bowery is probably now sketched out on booking them. 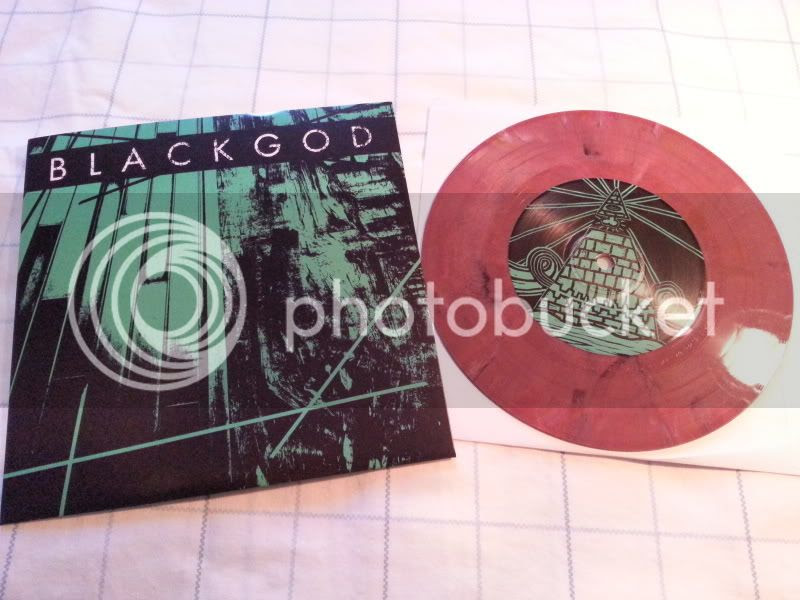 So I bought this solely because of Marcus' post about this record.  I read ex by the grace of god and endpoint and that it was good. So i bought it without checking out the band first, sometimes this is good and sometimes bad. I just didnt like this record. Didnt impress me at all.  I'll be surprised if I ever spin this again.  But then again, I usually hate my favorite bands before I fall in love with them
Posted by Dan at 12:00 PM No comments:

One of my favorite things about collecting records is stumbling upon a record that you literally had no idea existed; not on anyone's list, never seen it or heard speak of it.  And when you find it you know you have to get it.  Its a sweet victory when you score something you didn't know existed. Case in point this Incendiary 7". 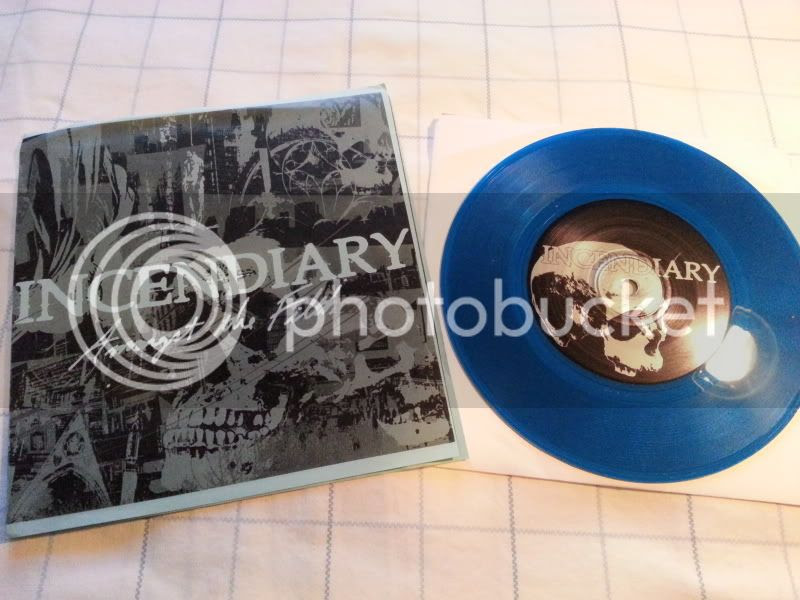 This is the first Incendiary 7".  The vinyl is exactly the same as the regular press.  The difference here is the cover, its a photocopy of the normal cover on light blue cardstock. Limited to 14.  I got this from Dave Campbell who runs State of Mind records, he was selling a huge list of rare stuff and this was on it. The photocopied cover makes it seem like this could have been a prepress for late covers or soemthing, but i was at the record release show for this 7" and I did not see this anywhere and they had the cover. I have to follow up with Brendan or Audley for the story on this.

I was going for a full Indcendiary collection and it was going well, BUT closed casket activities just released the 3rd press of the split with Xibalba.....on 27 different covers.   Yes you read that right, 27 fucking colors.  I love incendiary, and I was going to put an order in for all 27, but I just couldn't bring myself to spend all that money.  Especially when you have to order using all in merch's website and get raped on shipping.  Oh well guess I'm done collecting incendiary, fuck you cca.