Revelation has been repressing a bunch of their back catalog of late; Youth of today, In my eyes, Quicksand, Kiss it goodbye, etc. I grabbed a couple of them at Generation last weekend. 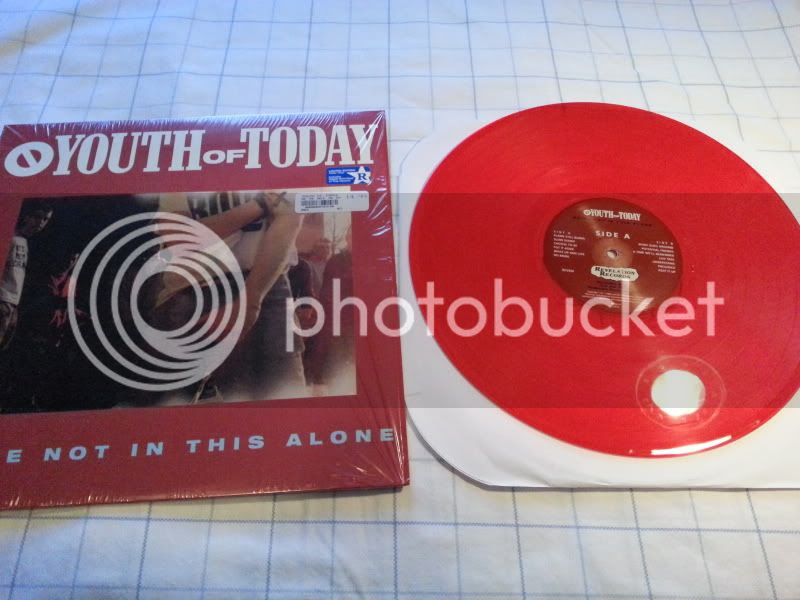 Generation had all the YOT represses (cant close my eyes, break down the walls) but i only opted to grab We're not in this alone.  This is my favorite Youth of today record and since I dont collect Rev or YOT by any means I felt i only needed to own this one.  I really like how they redid everything to look like the original pressing.  The red vinyl matches nicely to the cover of course. 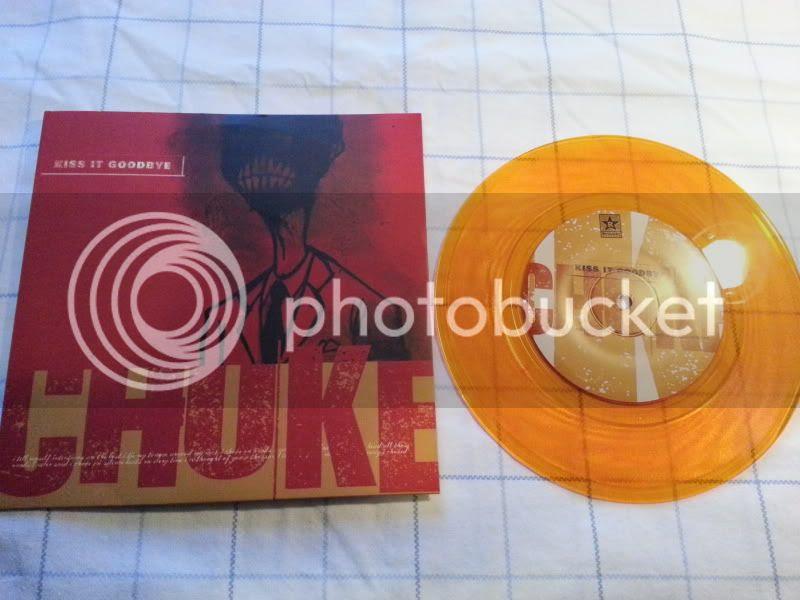 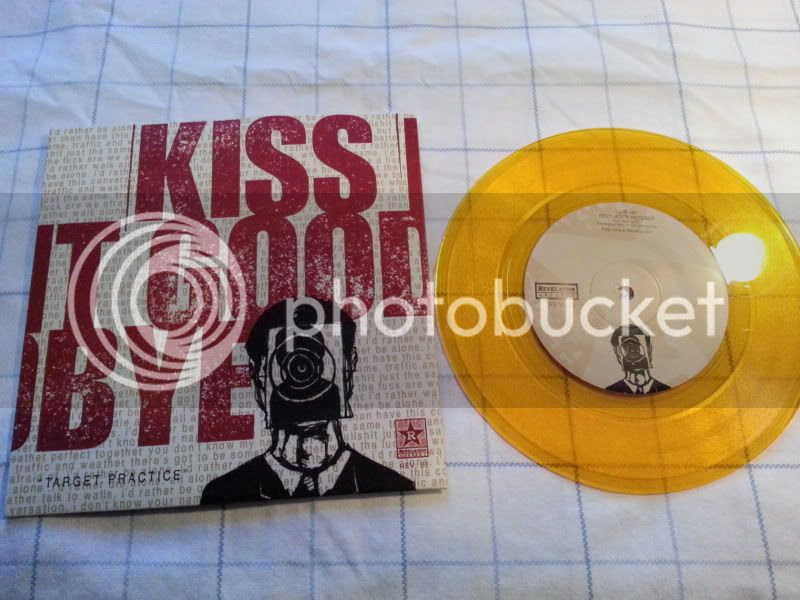 I also grabbed the above two Kiss it Goodbye 7"s.  Both are what is being called the "final press" and are limited to 330. Kiss it Goodbye is awesome and they played brooklyn a few months ago.  I am an idiot and didnt go, hopefully they come back soon. I really need to pick up the lp and the other in my eyes repressess now that i think of it. 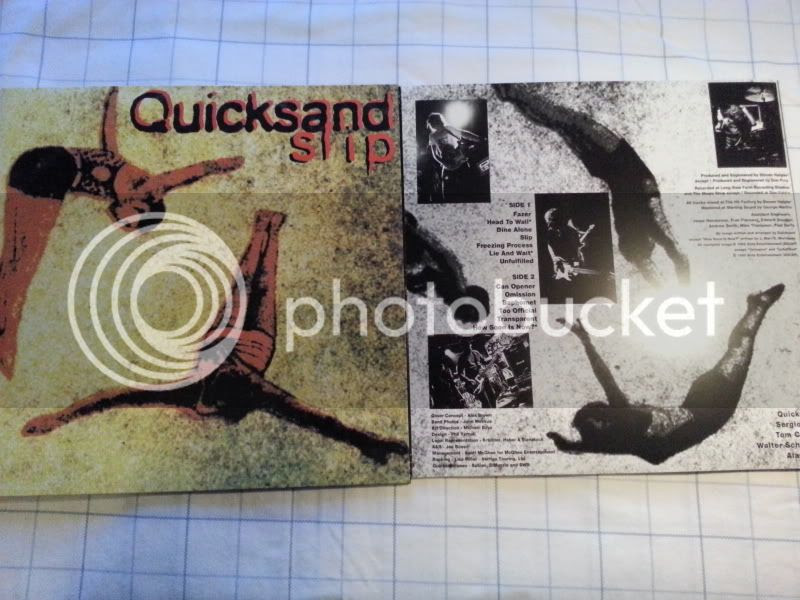 Back in July Shop Radio Cast announced they would be handling the repress of Quicksand's "Slip".  I immediately became super excited as Quicksand are one of my favorite bands of all time. I began to check SRC and Vinyl Collective daily waiting for them to announce when preorders went up.  They went up July 31st at noon and i was on my phone on break at work buying all of them.  Its so great to finally own psychical copies of this record, and they did a great job with it. The dust sleeve above on the right doubles as the  liner notes. 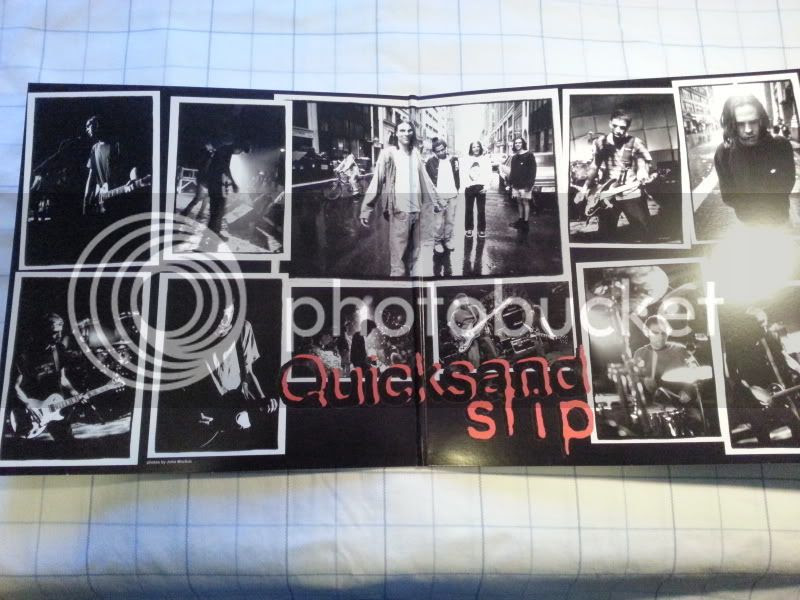 The lp is also a gatefold! With a bunch of pictures of the band in the 90's, ah such a great feeling to look at this. I constantly hate myself for being born in 87 and not earlier so i could have seen Quicksand in their heyday. 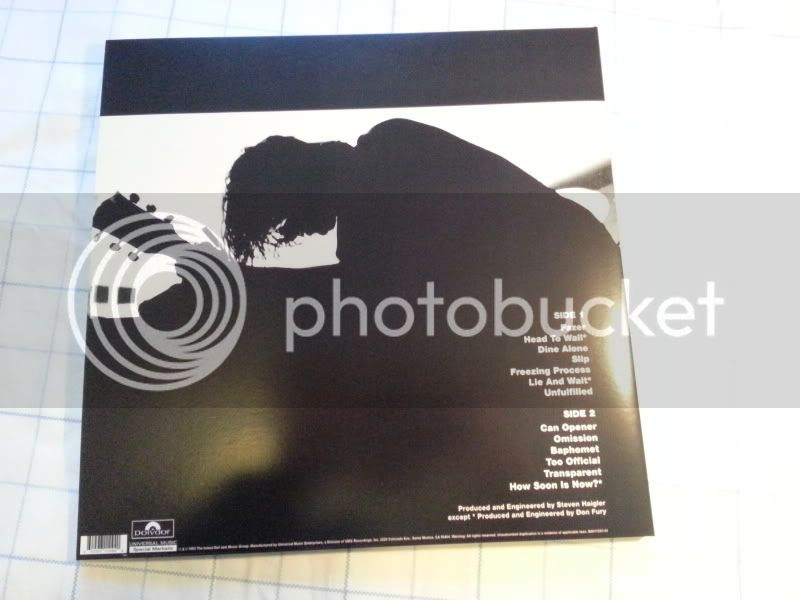 Here's a picture of the back of the lp, walter shredding silhouette style. 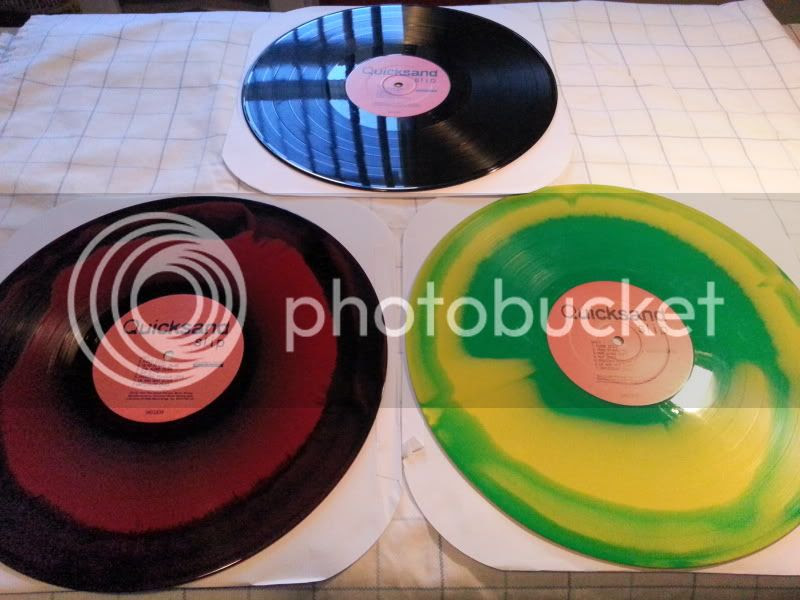 Here all all three 1st press colors, each limited to 500 and on 180 gram vinyl.  The red/black and green/yellow were available through SRC and the black was available through Dine Alone Records in Canada.  The vinyl is perfect and I couldn't ask for a better repress.  SRC actually handled the mailing for Dine Alone's black version.  When I got the black one i assumed it would say Dine Alone Records somewhere on the sleeve or vinyl labels, but no nothing there at all. Just says SRC.  Meaning that SRC pressed the black, said it was available thru dine alone in canada, then shipped it themselves. Kind of weird to go through that extra effort to include Dine Alone on this, when they dont seem to have done anything at all involving the repress. 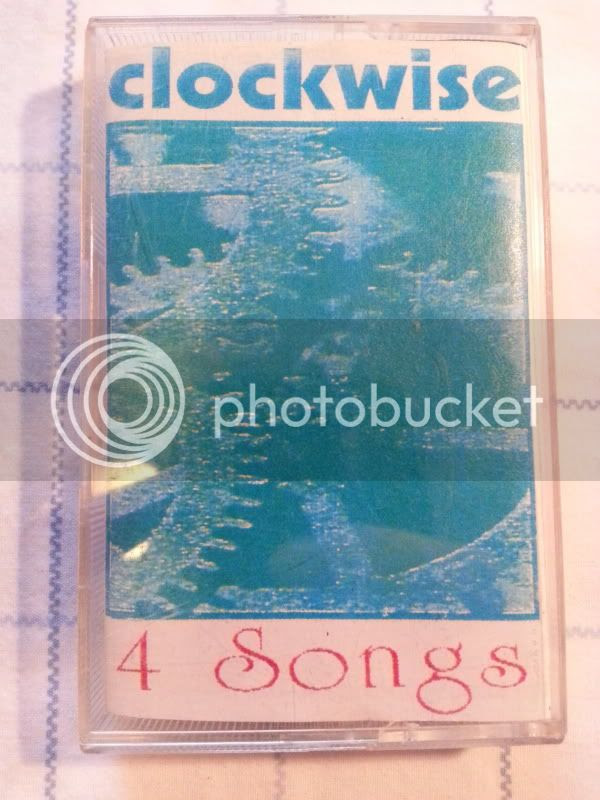 So last Sunday I was sitting in my kitchen eating a cheeseburger and reading a book when Nick texted me saying he had extra lihc demos and wanted to know if i wanted them.  Of course I said yes and within minutes I had paypaled him 20 bucks.  2 days later they arrived. The clockwise demo is from 1994 and is classic 90's long island. 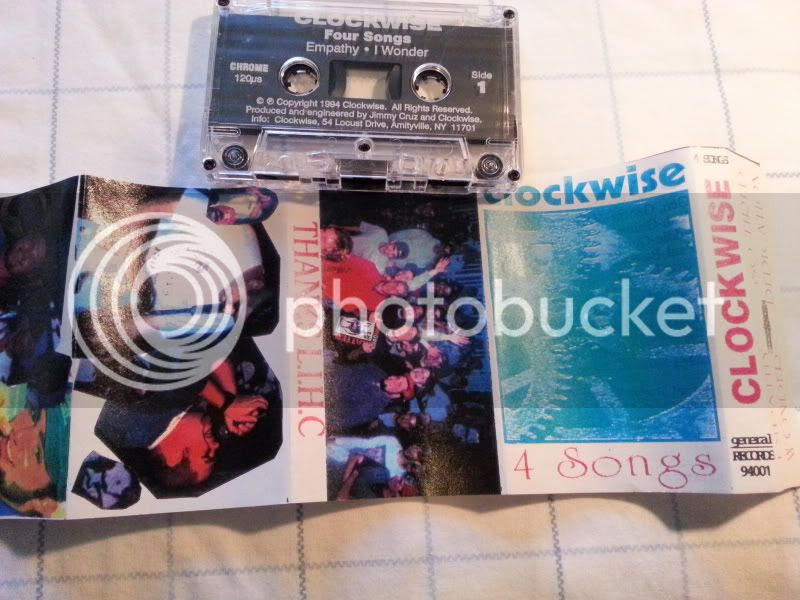 Here's the tape iself and the liner notes. Look at that cut and paste photocopy job! 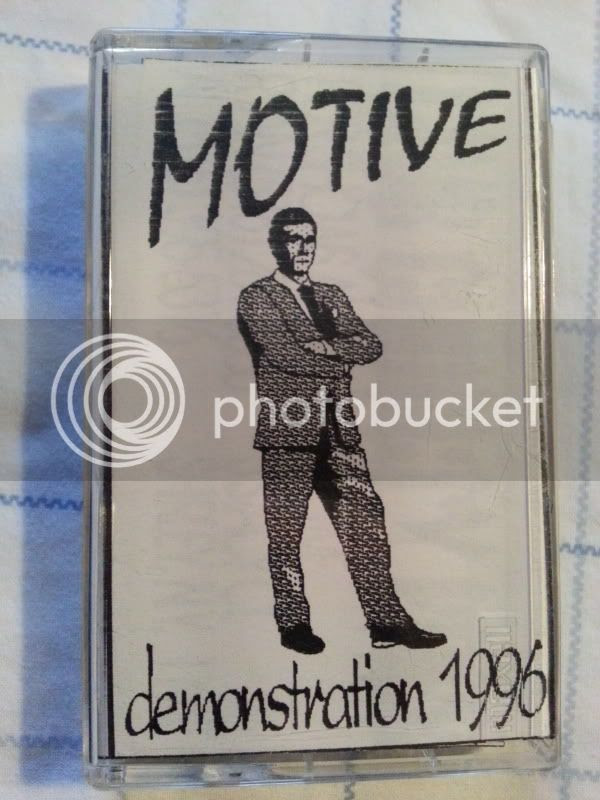 Next one i got was the Motive demo from 1996. I havent gotten a chance to listen to this yet as it appears my dad has hijacked my cassette player. 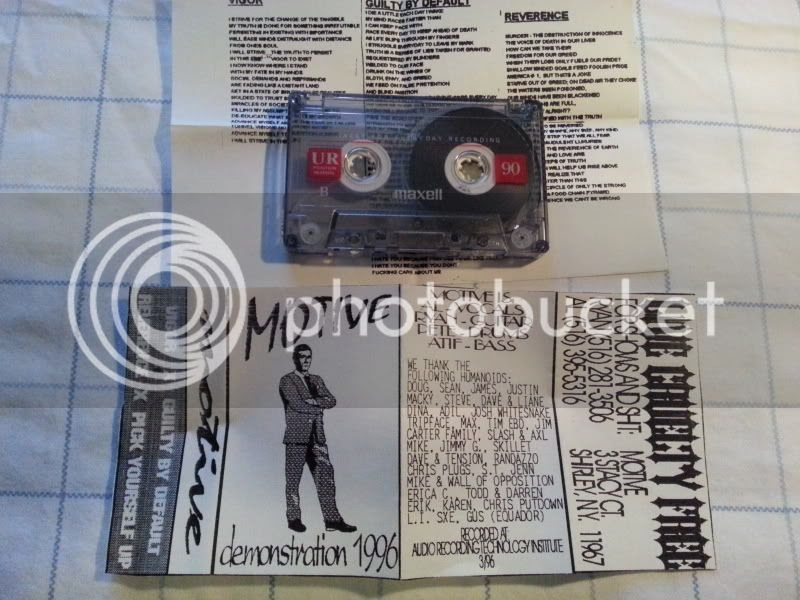 Once again, the tape, liner notes and lyrics. Thanks nick!

Before I go into the records I got from my most recent BBB preorder, I just want to give this label some praise.  A guy name Sam runs the label, and he goes above and beyond for this label.  Case in point for these 7"s. Both of these went up for pre-order in late May. In August i realized i hadnt gotten them yet and i checked out the BBB website.  And right there in the recent news i saw that the covers for the Clear 7" had been delayed.  He didnt have to put an explanation or status of preorders on his site, but he did because he actually cares about his customer.  On the contrary you have a label like Six Feet Under where you wait months on end for something to come, and if you ask for a status update you are met with annoyance and anger at you even questioning them.  On to the records. 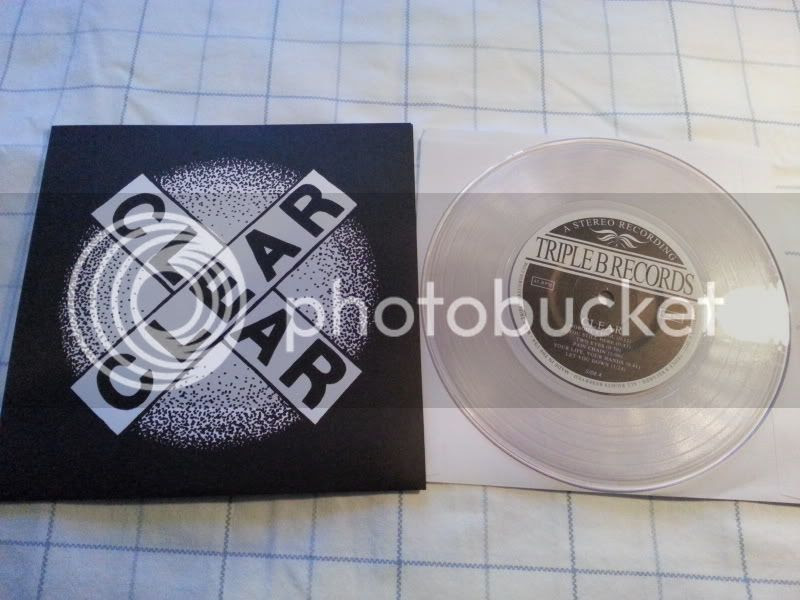 First one i preordered was the Clear demo 7" on, well clear vinyl limited to 300.  I downloaded the demo and I liked it a lot so i figured I might as well buy the 7".  When i got it i was reading the liner notes and realized that Pat Flynn of Have Heart does vocals for this band! No wonder why I liked them haha. 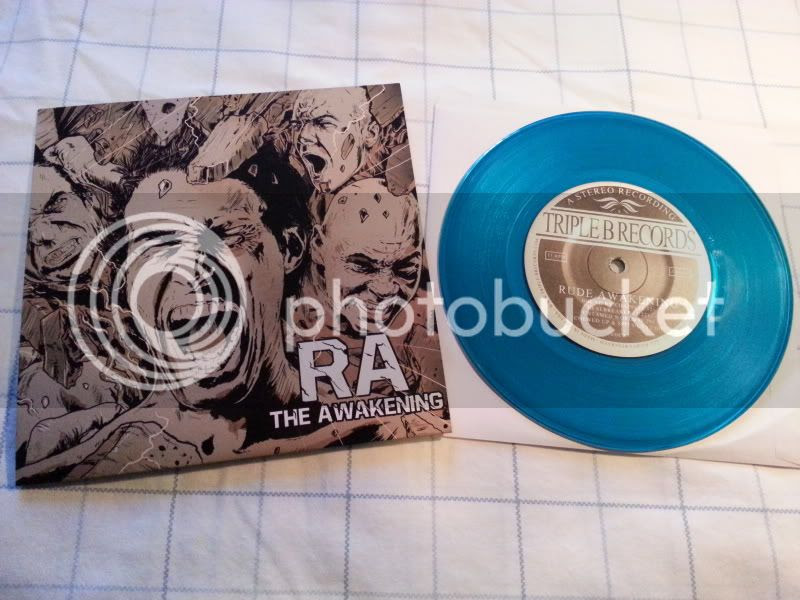 Secondly I preordered Rude Awakening's "The Awakening". I got Teal limited to 100.  This band played long island recently with Incendiary and Shipwreck.  I stupidly missed their set in favor of getting coffee.  Next time i wont because this band is awesome.  Also, once again while reading the liner notes i discovered Josh Hynes does the vocals, the man responsible for most of the boston/eastern mass hardcore shows in the 2000's. 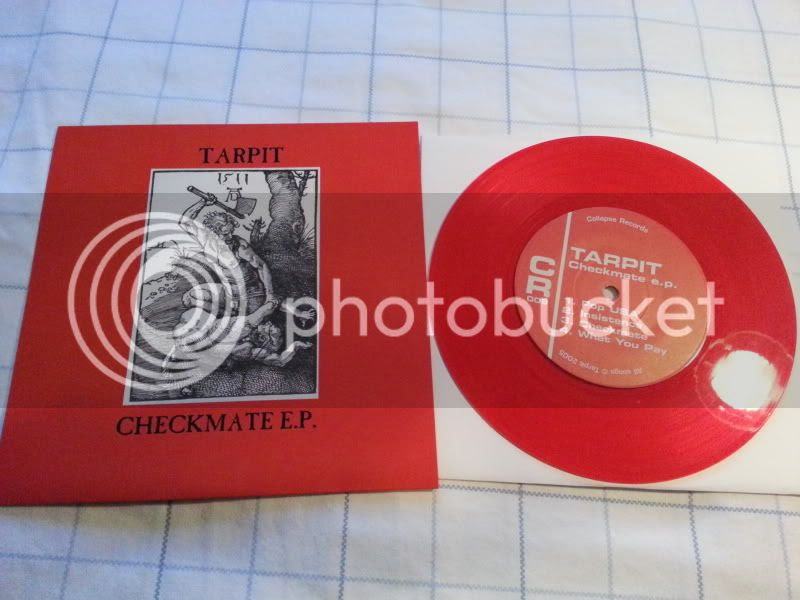 So a few posts ago I mentioned a seller making up for sending me the wrong color Elliot LP.  In apology he sent me the Tarpit ep "Checkmate" on Red wax. Once again this band rips and it seems i've fallen into starting to collect this band, even though I've never seen them. 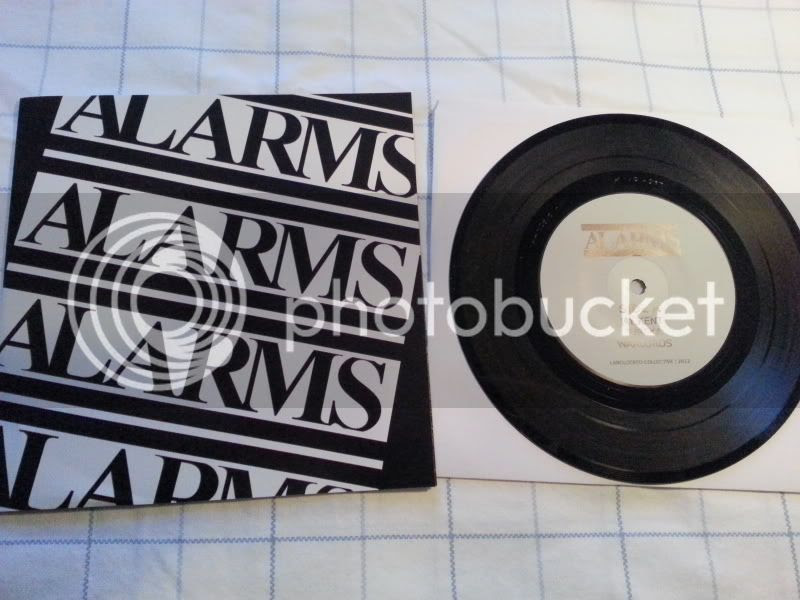 He also sent me this 7" by Alarms. Ive never even heard of them but it was cool of him to throw in something extra. I have yet to even listen to the record, I will soon. 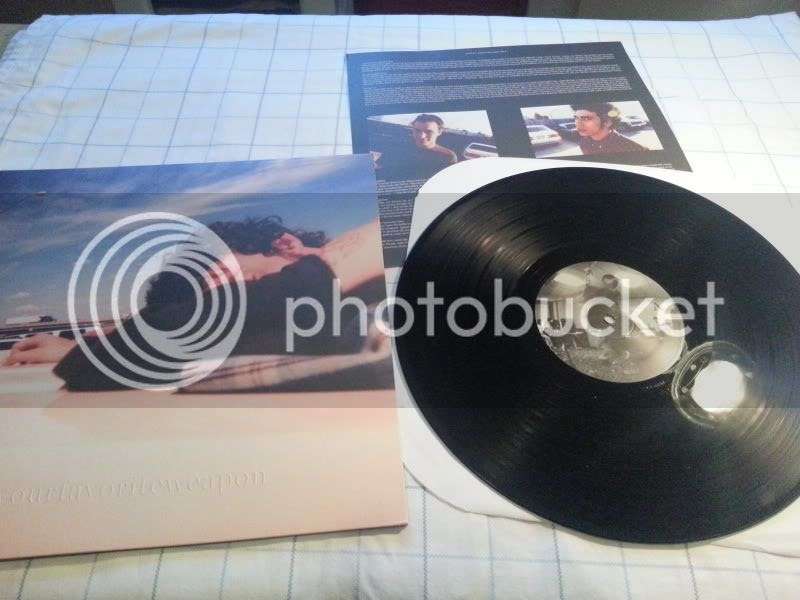 So maybe a month ago i was on my phone at work when i got an e-mail from Shop Radio Cast that they had the repress of Brand New's "Your Favorite Weapon" back in stock.  Knowing that the regular presses go for literally hundreds of dollars, I knew this was my only chance to own it for a reasonable price.  This record itself actually goes for over 30 on ebay! 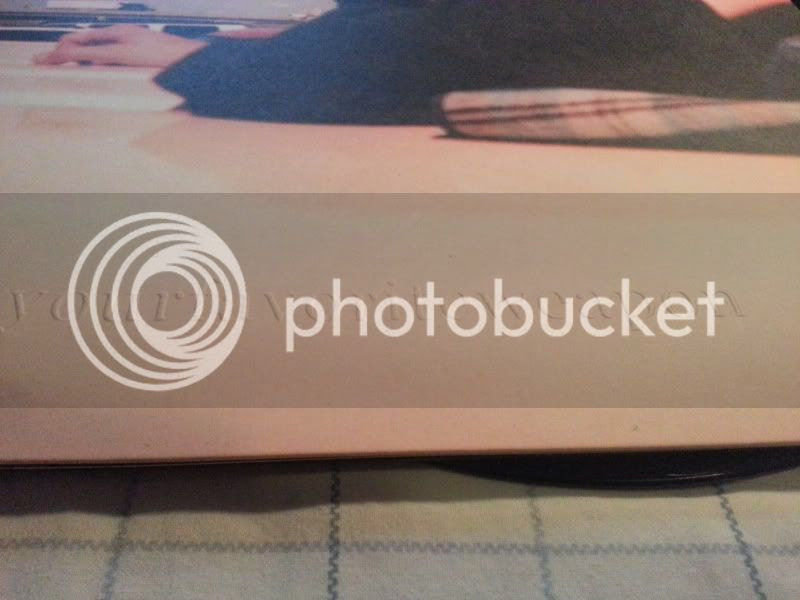 The coolest part of this is the embossed title of the lp on the lower front of the sleeve.  God i get so nostalgic when i look at this record, brings me back to being a teenager on long island. 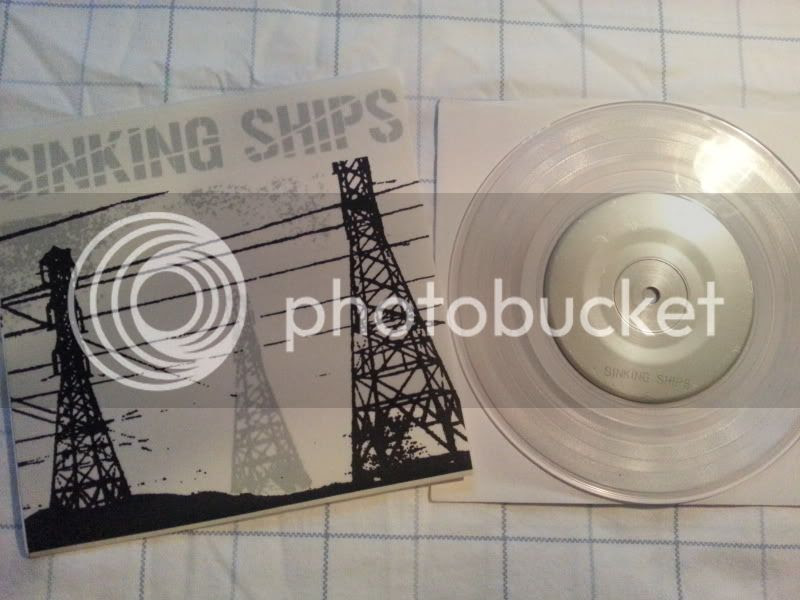 SINKING SHIPS DEMO 7" haha. Not much to say about how great sinking ships are. Truly miss this band. Excursion put some good effort into this.  I like how the labels on the vinyl itself are just silver with the band name stamped on them, keeps the demo feel to it. 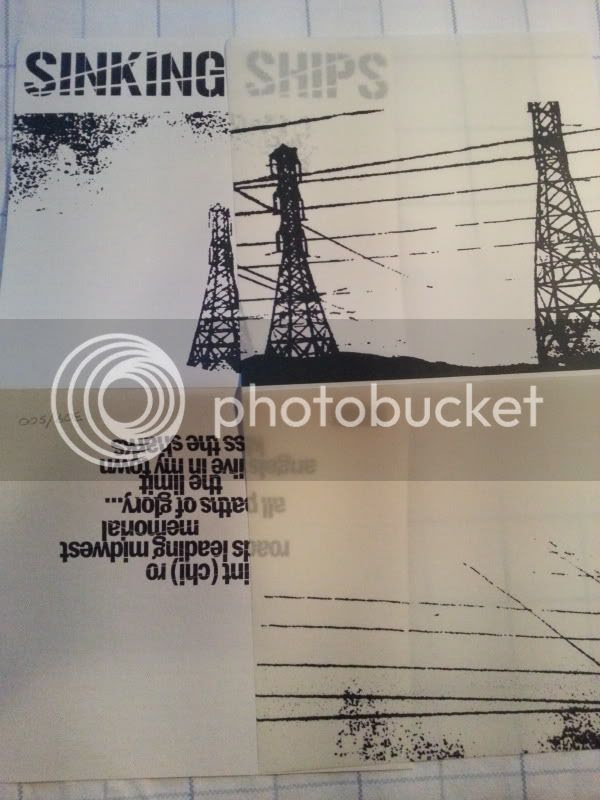 The cover is the coolest party however.  Its a 2 part cover, part of the artwork is printed on the paper sleeve and the rest is on opaque acetate.  This gives the cover some sort of a distance to the powerlines when you look at it. Well done! 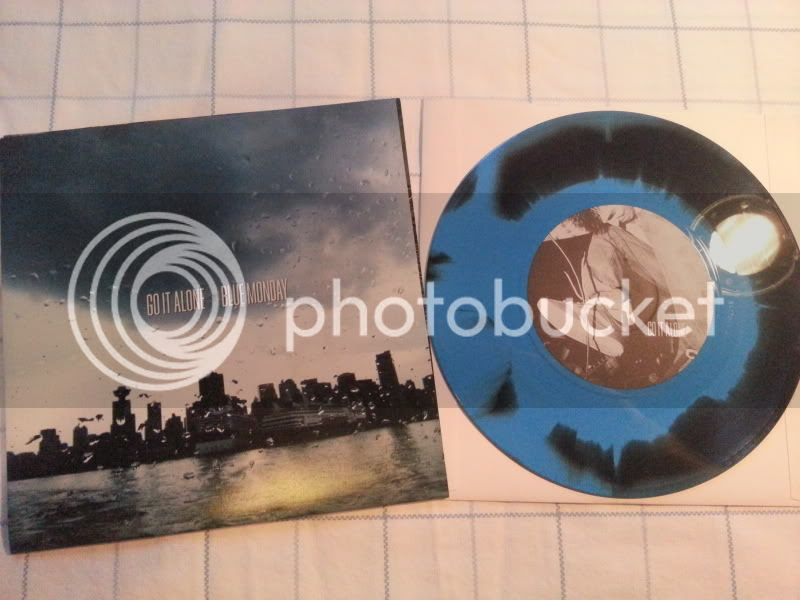 So this 7" is great, two bands I didnt really pay much attention to when they were around.  Go it Alone and Blue Monday.  As I now get into them I find myself really enjoying both, and am now trying to own at least 1 copy of each of the bands records.  When I got this record I noticed it was put out by Rivalry records, and realized I had completely forgotten that label. In the mid 00's they were putting out some awesome music, but now it seems they have stopped.  Too bad because Kyle at Rivalry had a good eye for good bands. Love the vinyl on this one.
Posted by Dan at 9:27 PM No comments:

Wow its been a while since my last post. I've gotten really lazy about updating, but I haven't stopped buying records. I have about 40 record I need to post about, So lets get started.  Last month I picked up a bunch of records from one guy on the B9 board.  He had set prices that were all extremely reasonable, the type of situation where you are pricing to sell. 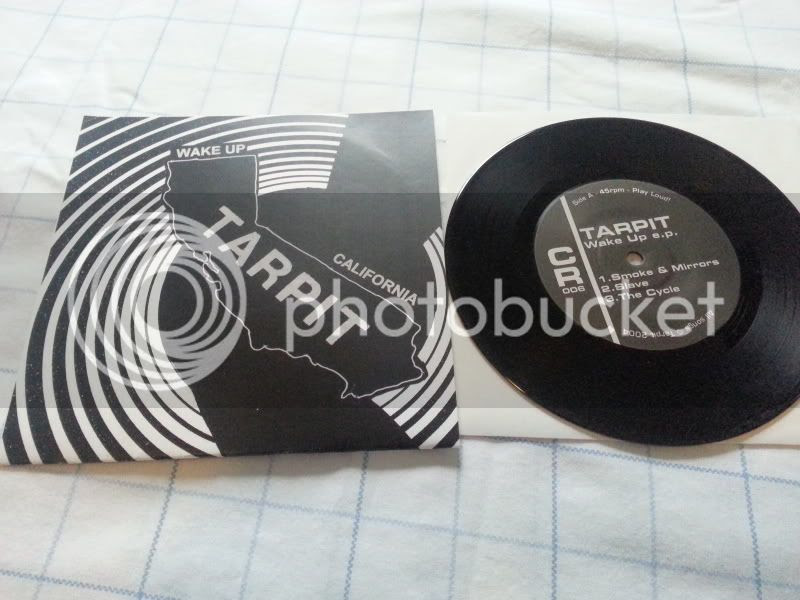 First thing I got was the Tarpit "Wake Up" 7" for their California tour.  I have the regular version but didnt know a cali tour press existed. For 2 bucks I would have been stupid not to get it as Tarpit rips. 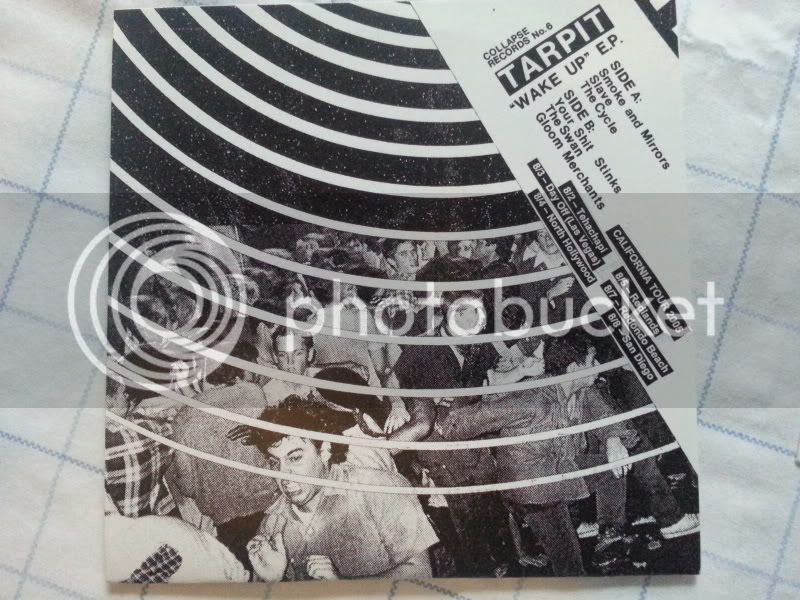 The coolest part about this record is that the tour cover isnt just one of those covers that slips partially over the regular cover.  Its an actual real cover, nothing makeshift about it.  I love when bands/label put extra effort into things. 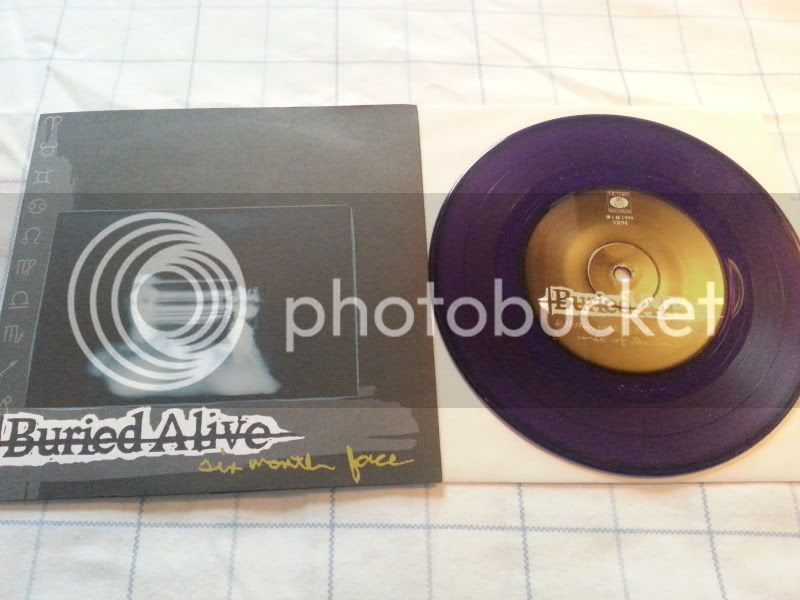 Next I grabbed Buried Alive "Six Month Face" on purple wax.  I have this on black already and dont collect buried alive, even though i really should as they are arguably one of the best 90's hc bands. But yea, once again a super low price forced me to buy this. 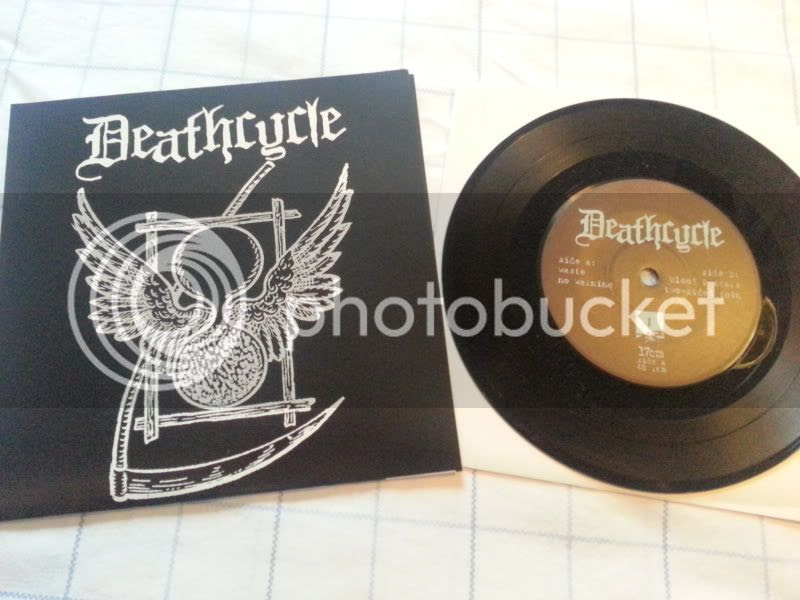 I also got the s/t Deathcycle 7".  I forgot i already had this so i grabbed it for 2 bucks.  The verison I already had is the more limited white out of 200.  Fun fact, Ron the singer lives in my town and I constantly see him riding his bike. 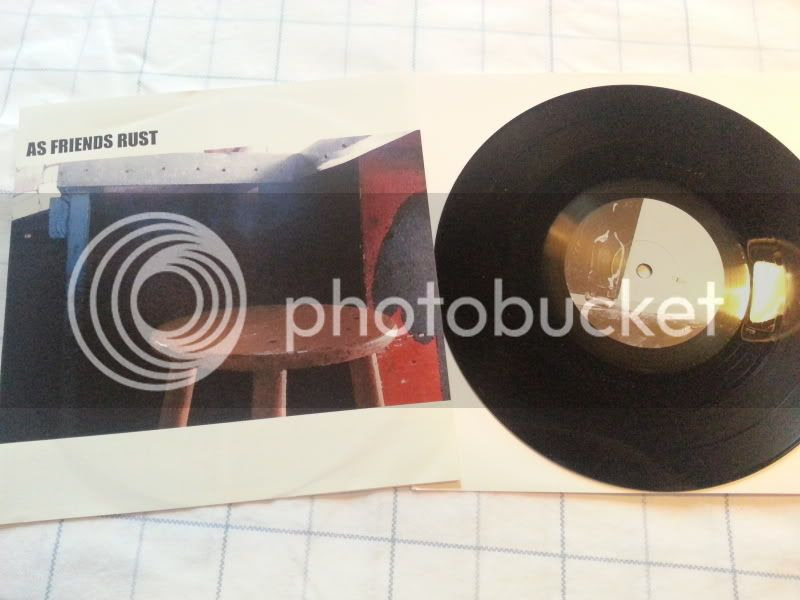 I was also able to add another 10" to my collection. This make #15!  Anway this is As Friends Rust  s/t.  Doghouse put this record out. One thing im noticing about that label is they put absolutely 0 money and effort into their vinyl.  The sleeve is literally a triple insert, no support or strength.  And the vinyl is flimsy as fuck.  At least the music is good!
EDIT: this is an 8" record, I'm an idiot. oh well, still only 14 10"s. 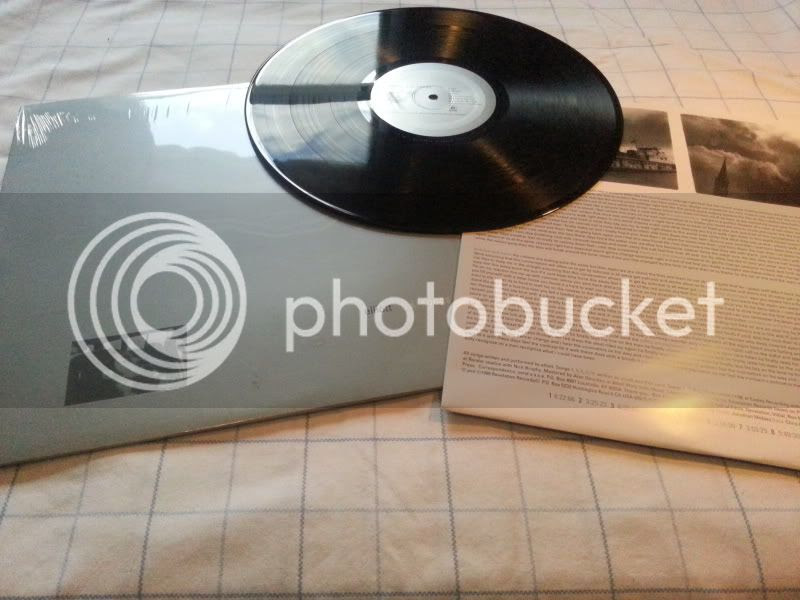 Next up i got Elliot's "U.S. Songs".  I had bought the Record Store Day 2011 version on grey from the seller, but when i got the lp it was still sealed. Upon opening it I found a black version, I looked up the pressing info to see if they had pressed it onto black when they did the rsd repress but found nothing.  I talked to the seller to see if this was a first press, but he did say he recently bought it and apologized for grabbing the wrong copy and offered to send the correct one asap.  However we made other arrangements and i got a different record and just kept this one. 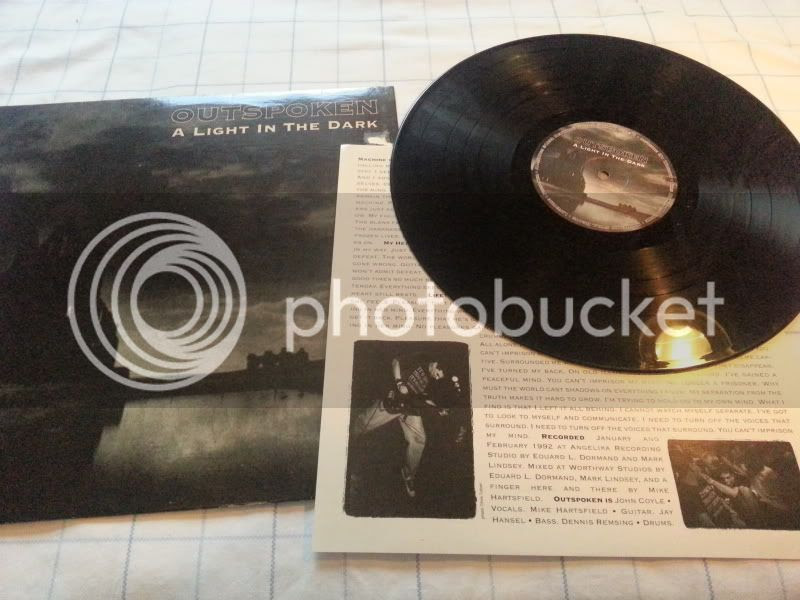 I also got the classic Outspoken "A light in the Dark" lp, for only 8 bucks.  The cover isnt in the best condition but the record is mint. 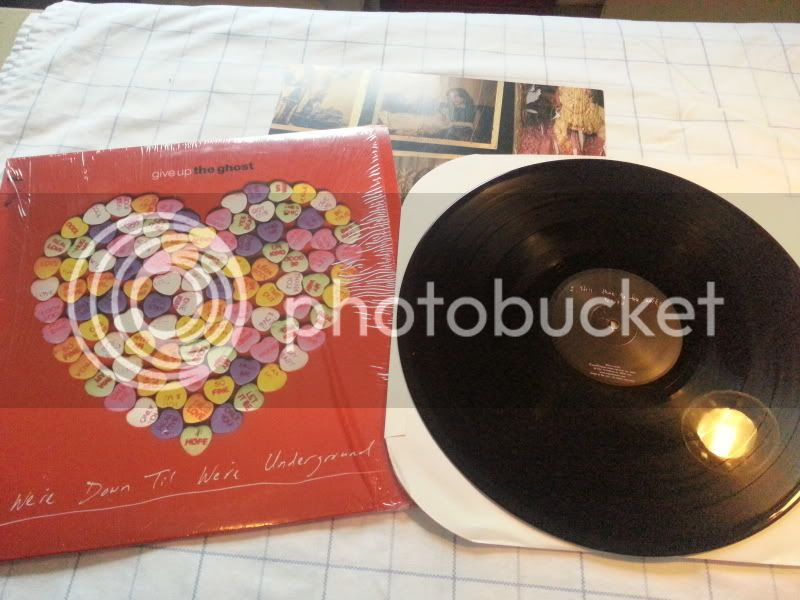 Finally, I got American Nightmare's "We're Down til we're Underground" LP.  I'm nowhere near the fan level that most people are with AN, but I do enjoy them a lot.  And seeing them this summer in NYC was one of the most memorable shows I've ever been to.  I got this record for 25 bucks from the seller, this thing on regular non-limited black goes for 50 on ebay! HOLY DEAL. I was super happy to own a 1st press AN record for so cheap!