So I never used to care about getting test presses.  The way I looked at it, it was almost pointless.  It was expensive and extremely difficult to accomplish.  Nowadays i feel differently and it's an odd sense of accomplishment owning a record that i never thought i would own. This is a prime example of that accomplisment. The Indecision / Indifference TEST PRESS limited to 5 copies. 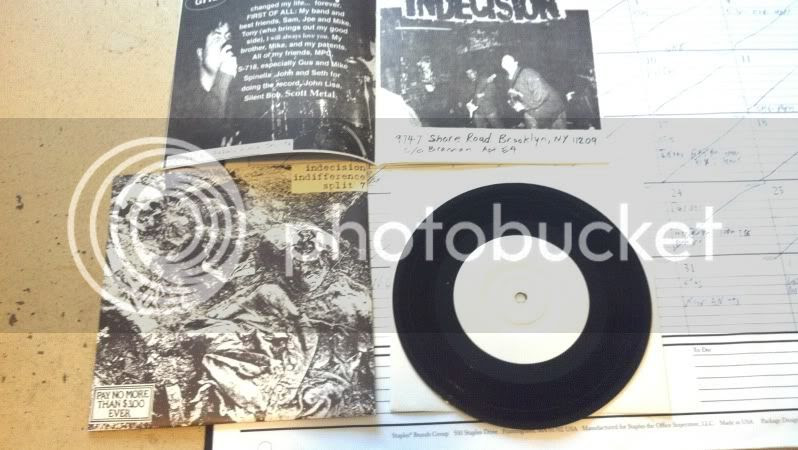 This popped up on ebay sometime last week.  I caught it at 3 days, and I have an alert for any Indecision record that comes up on ebay (thanks to Nick for teaching me how to do this) and I caught this before the alert did.  Which leads me to believe it was a short auction, which is odd for a test press since you would want maximum exposure to get as much money as possible.  Fine by me though because I think i got off easy on the price with this one. 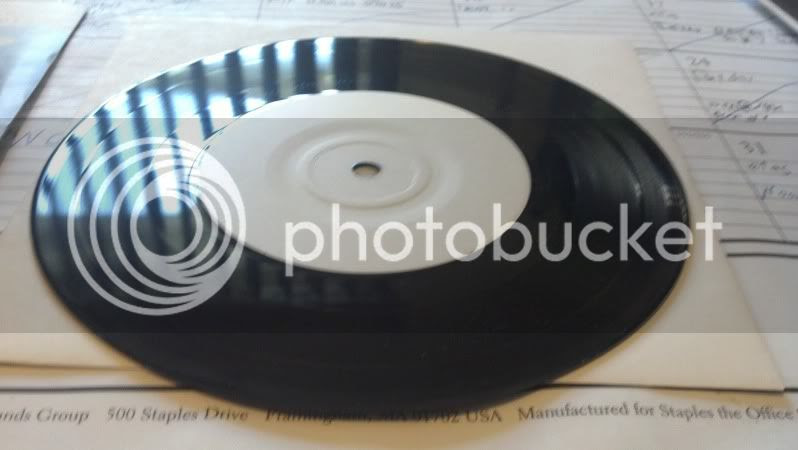 The seller was awesome enough to include a regular pressing of the 7" also, which now replaces the one I already had that was not in the best of condition.  This is now the second Indecision record that I have that is limited to 5, the other being the split with Shutdown with the cut/paste copied cover. 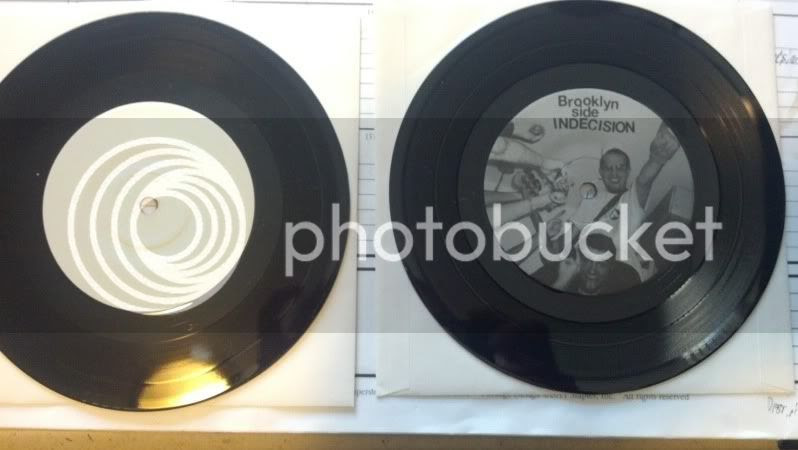 Indecision is actually playing tonight in the Village in NYC. Dont know who the first band is, but it's essentially a 90's show.  I cant wait to see Indecision, see you in the pit. 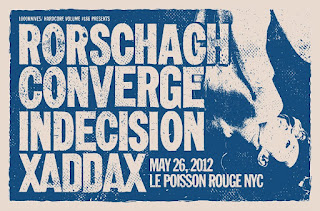 So a month or so i was lucky enough to snag a Pink copy of the Sainthood Reps lp "Monoculture" from hot topic.  The white had already long sold out and i had it in the back of my head to search for it. Well, luckily it didn't take long as a white copy out of 108 popped up on ebay, with a buy it now for like 12 bucks!  So here it is, lucky me. 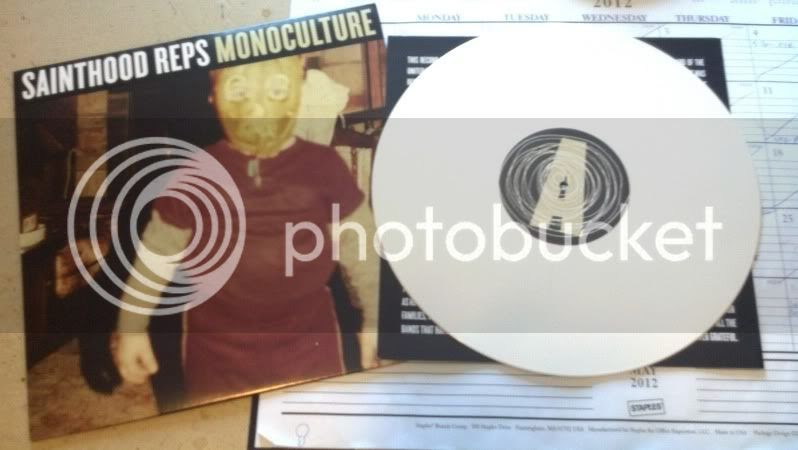 This record was actually recorded in the basement of Mike Sapone, who lives in my town.  I'm proud to know this was recorded near me as it is one of the best Long Island releases to come out in the last 10 years.
Posted by Dan at 9:34 AM No comments:

Now here is a fucking record!  Fire and Ice's "Not of This Earth", on upstate NY's Reaper Records. This is easily my favorite record of 2012 so far, and I really doubt any other records are going to top it.  I love the whole imagery of the "not of this earth" idea for the cover being outer space.  The black vinyl is out of 300 and I believe the most limited, kind of interesting that some labels are making the classic black the most limited version now. Also, the record has a full color insert/dust sleeve. I absolutely love when this is done its so multifunctional and looks great.  Anyway, I strongly recommend everyone and their mother to pick up this record. 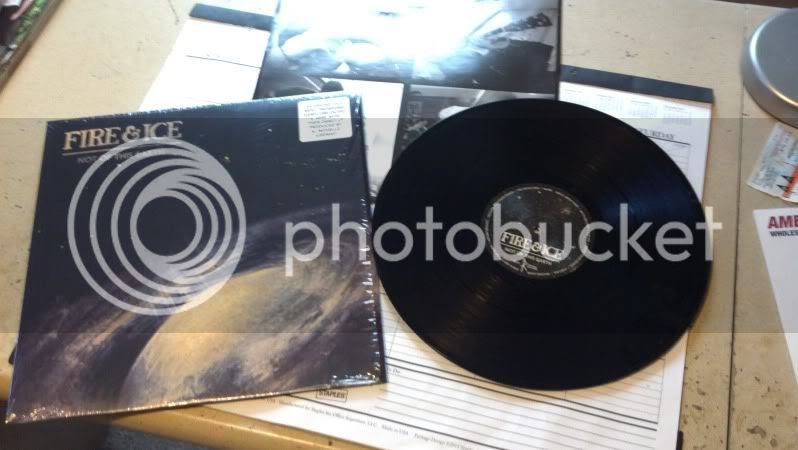 So here's another band I know next to nothing about, As Friends Rust.  The only thing I really do know about them is that they were a big influence on Crime in Stereo. I had actually never even heard of them til CIS did a cover at one of their last shows.  Since then I've started listening to them and have enjoyed everything I've heard.  Another mission has began to get one of everything they've put out on vinyl. 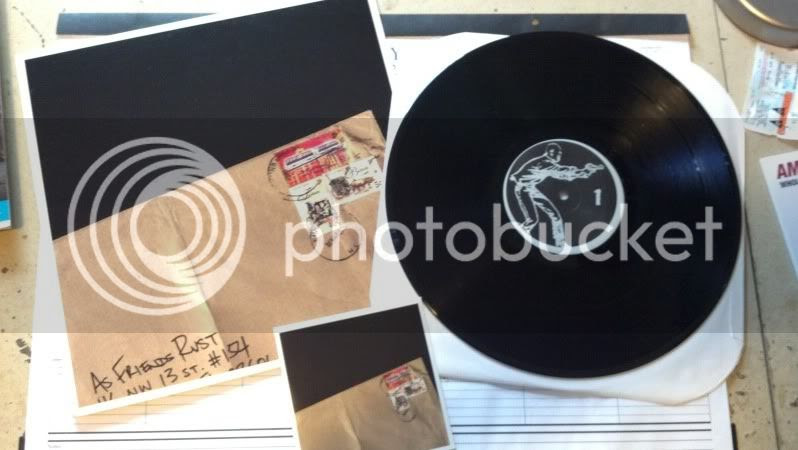 This is called "The Fists of Time An Anthology of Short Fiction and Non-Fiction by As Friends Rust".  It compiles a song from their split with discount, the fists of time ep and an extra circle jerks cover.  The LP didn't come with a full size insert, it came only with the cd booklet.  I really hate when labels do this,  you have a huge canvas to make an awesome insert but instead they get lazy and just throw in extra cd booklets.  The only lame part of an otherwise awesome record.
Posted by Dan at 7:04 PM No comments:

Bringing the hammer down at posi #'s

So this is pretty much the true definition of an ebay steal.  Im browsing ebay last thursday and i see the Think i Care "Mongrel" 10' from posi numbers. I put it in my watch list and determine ill bid on it if it stays low.  After i finish my morning browse i go back to my watch list and realize that the record wasnt just a starting bid at 10 bucks, it was a buy it fucking now! I bought that shit and paid immediately.  When i checked it out on popsike, it normally goes for $30+! 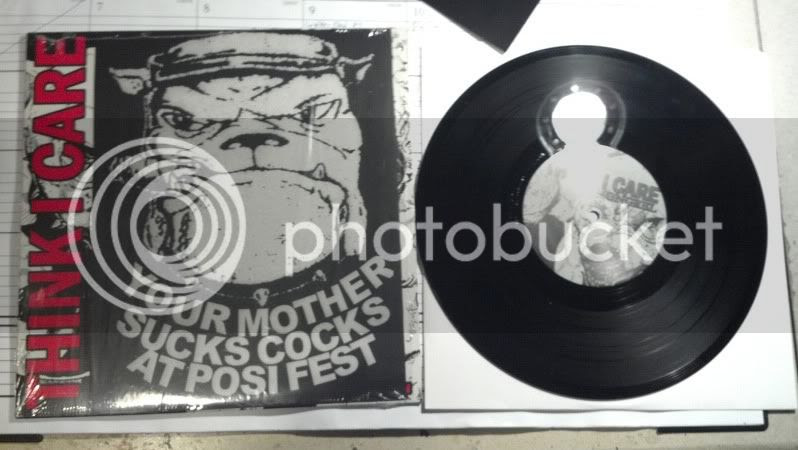 Anyway, this is limited to 170 and was sold when Think I Care played Posi Numbers.  Also is a sweet Sheer Terror ripoff cover.  I have no clue what year as A) i never got to see Think I Care, and B) I also never went to Posi Numbers.  Think I Care is another band I didn't like when I first heard them.  I picked up the World Aslyum LP before this, hated it and didn't give them another listen til about a year ago when I downloaded Mongrel.  Once again I kick myself for writing off a band before I've really given them a good chance.

So I figured my next post would be a Record Store Day recap, BUT the last of the RSD releases I got hasn't come in the mail yet.   So once that last record comes in, expect the RSD post. For now here are some records i got in the mail yesterday.

I ended up winning three records from the same seller on ebay, without realizing it.  I paid for shipping on each individually and the seller was awesome enough to combine shipping after the fact and reimburse me some cash.  He is getting positive feedback.

First up is Memorial's album The Creative Process/Berlin.  I had heard about this band previously when they were Renee Heartfelt, but i wrote them off because I thought that name was stupid (a mistake I make often).  Anyway I was having lunch at a Vegan spot in Huntington with a friend who recommended me both bands.  At first I wasn't interested, until he told me they had some Quicksand influences. If you tell me a bands influence is Quicksand, or sounds like Quicksand, I'm going to listen to them.  I got home and checked out both bands and promptly hated myself for sleeping on them.

With this LP, I believe there was some kind of problem when everyone pre-ordered it.  The problem being that no one got them, and the people that did got records that didn't actually play right. Whatever label orginally sold them disappeared and another label stepped up and i guess got the rest of the press of records that actually played and distributed/sold them.  I know nothing about the pressing info on this record.  The lp itself is heavy and looks great.  Even feels great to hold! 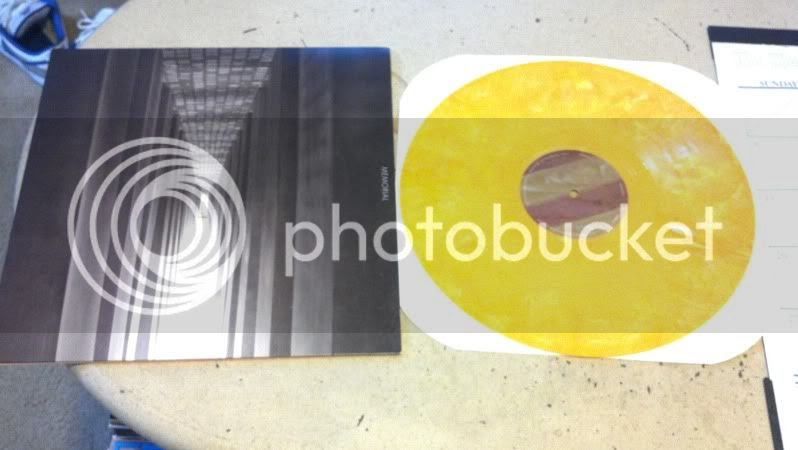 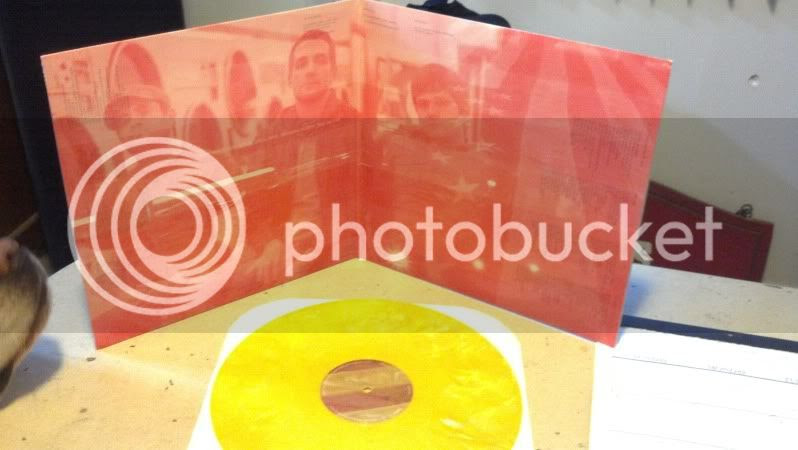 Next up is Mental "Planet Mental".  Easily one of the funnest and best hardcore records ever.  Lockin out released this and to me its an intstant classic.  I wish I had gotten to see Mental and I hope they one day do a reunion.  I dont give a shit that they arent all edge anymore, I just want to see em play.  I however did get to see the Invasion reunion a few years ago in NJ and that is as close as I will probably get. 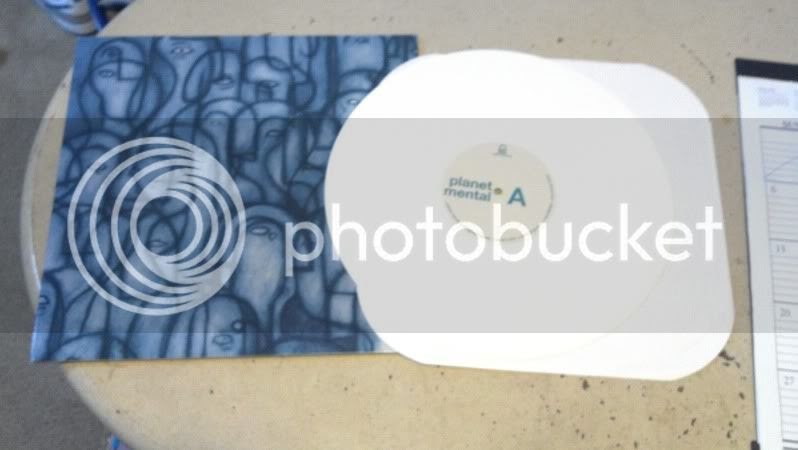 Tarpit is a band I know nothing about.  I bought a 7" of theirs from Academy in Brooklyn a few months ago and really enjoyed it. So now I'm on the mission to own everything they've released, which I think is just 2 7"s and one LP.  Anyway, standard black vinyl with no friggin insert.  Sometimes I wonder if these records really came with no insert, or if sellers on ebay just keep them for themselves for no reason. 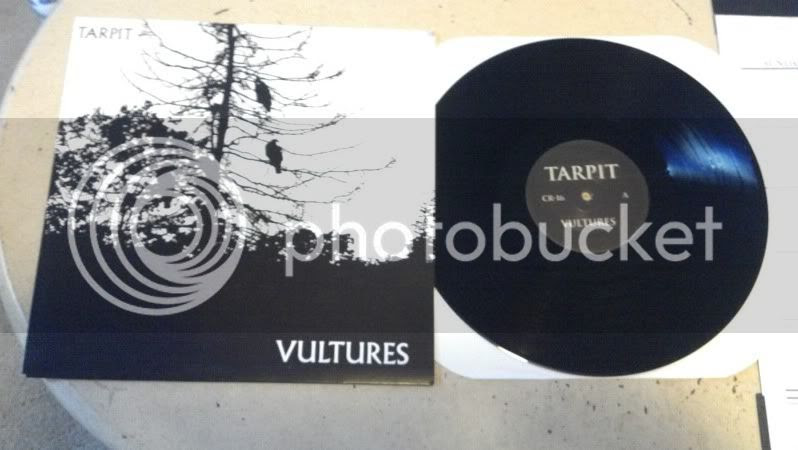 Last up is the almighty Modern Life is War "Witness" LP.  This is by far my favorite MLIW record.  I kick myself for not buying it direct from the band when they were around.  I swear I saw them so many times at the end of the 2000's but never bothered to buy the lp.  Now i had to pay 30 bucks for a first press, but its money well spent. 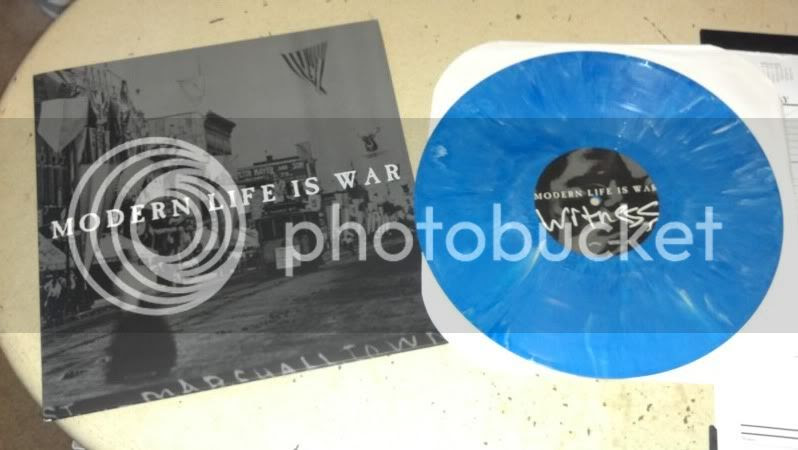 One of the most memorable times I saw MLIW was when they played at 538 Johnson in "east" Williamsburg, Brooklyn.  For those that have never been to 538, its a big studio apartment(illegal actually) in a warehouse where punx built their own rooms.  Anyway, the room was insanely packed out to the point of it being unsafe.  People were diving off one of the rooms on the side of the stage onto people.... This was a 10 foot drop and no one got hurt. At one point the police came and when they did, they just stood there and looked dumfounded as to what to do.  So, one of them threw up the horns and they all just left.  This is no joke. 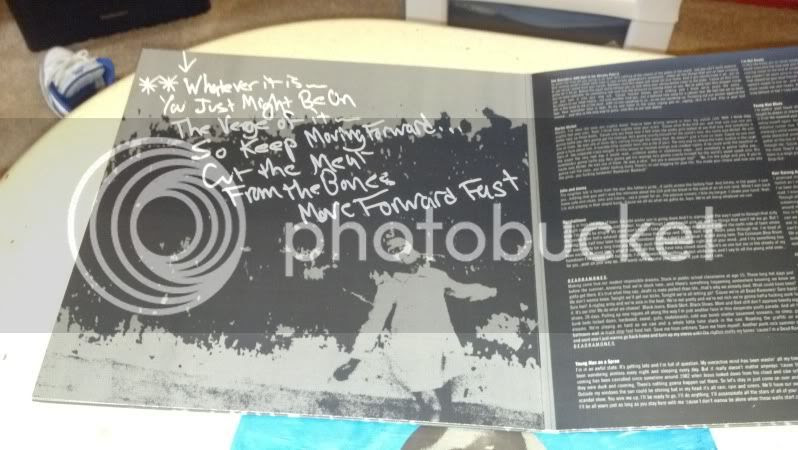 Anyway new mission is to get one 1st press of every MLIW release, this one is first press out of 1000. Next on the list is My Love My Way.